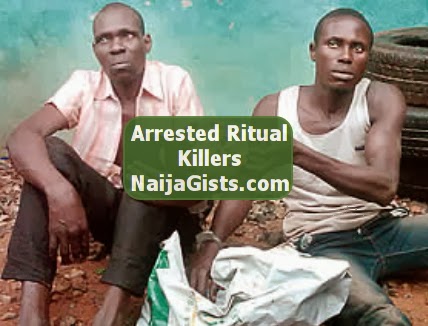 The Oyo State chapter of the Nigeria Security and Civil Defence Corps (NSCDC), at the weekend paraded two herbalists and five other suspects who were caught with a severed ‘human head’. Among the suspects paraded at NSCDC’s headquarters at Railway Quarters, Ibadan, were three middle-aged women.

A coffin, three cars, calabash, clothes, 16 hand sets, charms and other items were also recovered from the suspects who claimed to be natives of Oyo town.

The state Commandant of the NSCDC, Mr. Shem Obafaiye told journalists that the suspects were arrested at Iware, Oyo State, following an intelligence report.

The severed head found on the suspects had a deep machete cut and was dripping blood but the suspects claimed it was not a real head.

One of the herbalists, Hamidu, who is the group leader said he was not a ritualist but was only in the act of defrauding his clients by presenting them with fake parts.

“I was in my office when I started hearing gunshots. What you are looking at is not a human head as they claimed, we used cassava flour to mould it. We put blood we got from a cow so that it would look as a real human blood. I agree that I am a fraudster and not a ritualist. I have been practising as herbalist for the past 10 years. I don’t kill human beings.”

But Obafaiye insisted that the issue of the head being fake or not would be deciphered after the coroner’s inquiry.

According to him, the suspects would be handed over to the State Security Service (SSS) for further investigation.

The NSCDC boss however, advised that parents should monitor the movement of their children . Ritualists, he warned, were always lurking around.

[Reported by Patrick A, Daily Sun]