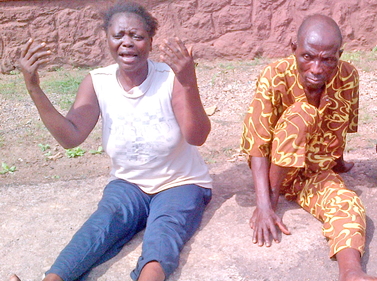 November 18, 2016 – Herbalist Who Murdered Stepdaughter For Money Ritual Exposed As Wife Speaks Up

55-year-old Fausat Odubela, a mother of five, was a picture of grief. As she narrated the story of how her 17-year-old daughter, Amudat, was beheaded, tears streamed down her face. She couldn’t speak for long without tears almost choking her. 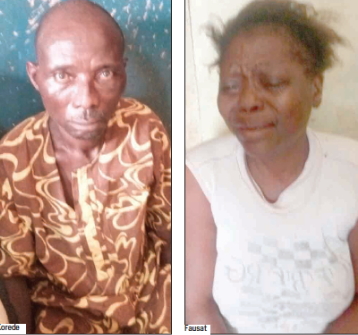 Her hair was askew and her clothes begged to be washed. She sat beside her husband, Korede Odubela, 63; the man who killed her daughter and left her body in the bush for his son, Seun, 34, to behead and disemboweled for money ritual. Fausat, who said she was still reeling in shock, couldn’t believe that she had slept on the same bed and had intimacy with Korede and never really knew him.

The most troubling aspect of the whole drama now confronting Fausat was the fact that Korede was not ready to go down without dragging somebody with him. Korede had told the police that he killed Amudat on the instructions of his wife, Fausat. Amudat was not the biological child of Korede. It was gathered that after Korede, a herbalist and hunter, killed Amudat, he left her body in a bush opposite their home for Seun.

Seun is also a herbalist; he located the body, cut of the head, hands, and breasts and removed the intestines. Korede, who claimed Lekan Lawal, 23, a member of their village in Imodi Mosan, Ijebu-Ode, assisted him in killing the girl, would have got away with the crime, if not that he got drunk in a beer parlour. Under the influence of alcohol, Korede bragged that he had killed the missing Amudat. 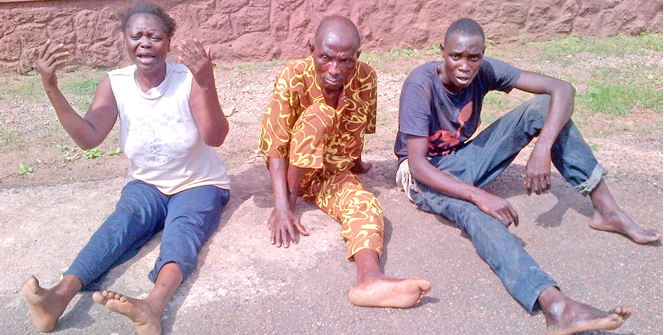 The police said: “When he made that statement, people who heard him didn’t take it with levity. Everyone knew him in the village and feared him. He is a herbalist. He had once kidnapped and killed someone in that community. When he said he killed Amudat, people ran to tell the head of the local vigilance group, called Mr. Oritoto. Korede was taken to Baale’s place, beaten severely by people, but still refused to confess.”

Oritoto handed Korede over to operatives of the Federal Special Anti-Robbery Squad (FSARS), Ogun State. Within days of being arrested and quizzed, Korede got tired of staring into the unflinching gazes of the policemen, who were not buying his denial. When he realised his story did not hold water, he started singing like a bird. He took FSARS operatives, led by the Officer in Charge, Mr. Uba Adams, a Deputy Superintendent of Police (DSP), to the bush where he left the body.

Operatives that visited the scene said that the first thing that puzzled them was the lack of stench emanating from the body. The body was without head, breasts, hands and its stomach had been slit open. The body was also in uniform.

This made police to form the theory that Amudat was grabbed while returning from school. Less than 30 minutes after discovery of the body, it suddenly started emitting a putrid stench.

The stench enveloped the community, causing gasps of shock and outrage. Korede would later confess that he used his powers to ensure the body didn’t smell and that Fausat never went towards that direction in the area, while searching for her daughter.

Finally realising the chips were down, Korede further confessed that he carried out the deed with the support of Lekan and on the instructions of his wife. Fausat collapsed when she heard Korede’s allegation against her. Just like Fausat, Lekan said he didn’t know what Korede was talking about. Police said: “Korede is married to Fausat. She came into the marriage with five children.

Korede said that the deceased, Amudat, was too stubborn and troublesome. She was also disobedient. She also used to leave home, to sleep outside for two to three days. Always, the mother would run to Oritoto, to report and complain about Amudat. One day, in anger and frustration, she said that if Amudat died, she would have rest.”

Today, those words, uttered in frustration by Fausat, are what Korede is capitalising on. Seun had since disappeared into thin air. Recalling the genesis of her trouble, Fausat said that she and Korede had a deal, to embark on a marriage of agreement. She said that was the only deal they had. The deal was sealed 10 years ago. Fausat said: “I married into a polygamous family. I sell provisions. I had five children for my husband before he died.

Amudat was my fourth child. I started having problem with one of my legs. I developed a mysterious wound. I went to several places for cure, but the leg just kept getting worse. One day, someone directed me to Korede. They said he uses herbs to heal. I went and discussed with him.

He said I should pay, but I didn’t have any money. He said if he treated me, he would have to marry me, since I didn’t have money, I agreed.” Fausat became one of the three wives of Korede, a father of 11.

Fausat’s marriage to Korede didn’t produce any offspring. When Korede wanted to embark on the money ritual, he didn’t think of using any of his 11 children; he picked on Amudat, a Junior Secondary School student (JSS 3). Recounting how he killed Amudat, Korede said: “She used to sleep at the corridor of the house whenever she was around. On that fateful day, I invited Lekan to come and kill her; he said it was no problem.

Lekan is a herbalist and also works in a quarry. He came to wake me at night. Lekan held her by the neck and attempted to strangle her, she struggled, and I held her legs. Lekan then strangled her. When were sure she was dead, we carried and dumped her body in the bush, opposite our house.