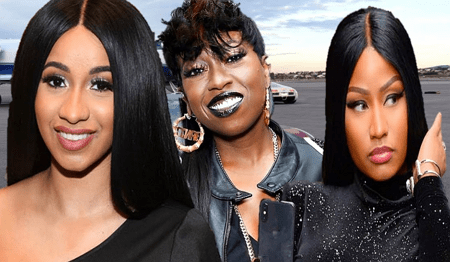 This article brings you a list of highest paid female rappers & actresses in the world, including their respective net worths.

The entertainment scene is blankly dominated by the music industry and the movie arena. And the various musicians and actors make up some of the richest personalities in the world.

Unsurprisingly, America, with Hollywood and the rap-dominated music scene, is globally seen as the home of entertainment. And prominent American rappers and actors/actresses dominate the world of music and movie respectively, with the female players (rappers and actresses) making equal (if not more) contribution, as their male counterparts

Therefore, in this piece, we have come up with two sets of compilations, showing the list of highest paid female rappers, and that of the highest paid actresses in the world. Read on!

List of Highest Paid Actresses in the World & their Net Worth

According to Forbes, Scarlett Johansson raked in over $40 million in 2018, which makes her the highest earning actress for the year. She is best known for her role in Avengers, where she starred as the “Black Widow”.

However, despite being the most successful (highest paid) actress in 2018, Johansson is further down the pecking order on the rich list, with an estimated net worth of $145 million.

Jessica Alba is another top-earning actress who has been able to create multiple streams of income for herself. Her business line – The Honest Company – is valued at $1 billion.

The star actress debuted on the big screen in 1994, and has since starred in countless Hollywood movies. She’s one of the star features on the recently released TV Show – LA Finest, as well as much-anticipated movie titled Killer’s Anonymous.

Sandra was born into an entertainment family. Her father was an Opera Singer, while mother was a voice teacher. She first appeared on the big screen at the age of 5 (as a child actress). However, her breakthrough came many years later, with her starring role in the 1994 classic – Speed – where she starred alongside Keanu Reeves.

Subsequently, Sandra Bullock featured as the lead actress in a number of top Hollywood movies, and she remains one of the most sought-after and highest paid actresses today.

According to recent estimates, Bullock has a net worth of $200 million.

Julia Louis, who is now known as Julia Louis-Dreyfus, made her name as a comic star. She started acting in the 1980s, and she has won numerous Emmy and Golden Globe awards to validate her legendary/iconic status.

The star actress’ recent appearance was in Veep, which earned her a staggering six Emmy awards.

As gathered, Julia may be worth billions; however, feasible estimates put her net worth around $210 million.

Julia Roberts needs no introduction to movie lovers. She is arguably the most respected actress today, having been able to live a simple life, devoid of controversy.

The highlight of the superstar’s career, which came in the movie titled Erin Brockovich, earned her an Oscar and a staggering $20 million (the first in the industry).

Julia Roberts is very much one of the stars of modern day Hollywood, and she remains one of the highest paid stars around, charging millions of dollars per feature.

Her net worth has been estimated around $220 million.

Principal is one of the oldest actresses on our list. And she still maintains her status as one of the highest paid and richest actresses around. The veteran actress rose to fame in the popular TV Show titled Dallas, where she starred as Pamela Barnes.

Also, the actress own’s a business empire, which has a record revenue of over $1 billion.

However, her net worth has been estimated further down, at $245 million.

Aniston is one of the most popular movie stars in the US, and she rose to fame after her starring role in the 1990s situation comedy titled – Friends. At a time, Aniston was reportedly being paid $1 million per episode. And it’s believed that she earns more than that now.

Aniston’s net worth has been estimated at $245 million.

Cher is one of the most versatile entertainers ever liveth, as she has been able to make her mark in both the music scene and Hollywood.

She has numerous Grammy awards, Oscar and Emmy awards. And while she’s obviously past her prime, she still remains one of the richest and highest paid in the game.

Cher will be featuring in the much-anticipated movies – “Disco Fever 1977” and “Artist in Residence“.

According to recent estimates, Cher has a net worth of $360 million.

The iconic twins – Mary Kate and Ashley Olsen – started acting together since they were kids. And they both played the role of Michelle Tanner in the movie – Full House.

Much of the twin sisters’ wealth came from the resounding success of their home video series titled ‘The Adventures of Mary-Kate and Ashley”, which grossed billions of dollars.

Recent estimates put the Olsen twins net worth at $400 million.

Lopez is one of the most popular personalities in the world, having made her name in both worlds (music and movie). She ventured into acting in the early 1990s and made headway in 1995, with her starring role in Selena.

Today, Jennifer Lopez typifies who upcoming actresses and singers would dream of becoming. And she is arguably the highest paid actress today.

The star actress/singer’s net worth has been estimated at $400 million.

DJ Spinderella, whose real name is Deridra Roper, is one of the richest musicians out there. Apart from being a well known rapper, Deridra is also an online personality, TV host and actress; having featured in a number of Hollywood movies.

Furthermore, the rapper is an entrepreneur, who owns and runs  a beauty salon. Hence, with these streams of incomes, her bank account keeps swelling.

Estimates have put DJ Spinderella’s net worth in the region of $10 million.

Eve is a legend in the American music industry, having been around for well over two decades. And she’s also made several appearances in Hollywood, notably in movies like Whip It and Ice Cube’s BarberShop among others.

As gathered, Eve stands out as the first female rapper to win a Grammy award in the Rap Music category. And today, she is the perfect role model for all aspiring female rappers and musicians.

On top of Eve’s illustrious career, she has ventured into the business line, setting up a multimillion dollar clothing line named Fetish.

Iggy Azalea is arguably the richest non-American rapper today. She is a relatively new musician, who is based in Australia. Iggy released her debut album titled – The New Classic – only five years ago, in 2014. And the album hit platinum real quick; topping all known music charts, including America’s own Billboard.

Today, Azalea ranks among the big wigs in the music industry. And estimates have put her net worth around $13 million

Salt, whose real name is Cherry James, is one of the co-founder of the famous Hip Hop rap trisect named Salt-N-Pepa, which was formed in 1984. The rap group, which include Salt (Cherry James), Pepa (Denton Sandra) and Deridra Roper, was disbanded in 2002, but later came back together in 2008.

Today, Cherry James stands out as one of the most respected and highest paid female rappers in the game, with an estimated net worth of $15 million.

Pepa, named Sandra Denton, is the lifelong partner of Salt (Cherry James). She has been widely credited as being the main voice of the outfit, and her popularity has earned her myriads of laurels, accolades and most significantly, wealth.

Also, Pepa has featured in a number of movies, and she also made a name as a TV host.

According to recent estimates, Pepa has an estimated net worth of $15 million.

Lil Kim is a popular name in the industry, with decades of experience under her belt. She is known for her vigour-filled music style, as well as her vulgar lyrical contents.

The rapper, whose real name is Kimberly Jones, is business-minded, having created a beauty salon and a couple of clothing lines worth millions of dollars.

Lil Kim’s net worth has been estimated at $17 million.

Antonia Reed, whose stage name is Bahamadia, is a renowned lyricist – a full-blooded rapper. Having been around since 1996, the rapper has been able to carve a niche for herself, with respect to her unique lyrical style and rhythmic flow.

Bahamadia has a number of albums under her belt, most of which hit platinum. She also had a rap-themed radio show titled “Bahamadia’s B-Side”, which was one of the most popular radio shows in the late 1990s.

With respect to Bahamadia’s decades-long illustrious career in the music industry, she has been estimated to be worth in the region of $30 million.

Missy Elliot is one of the most decorated rappers alive, with 6 platinum albums, multiple Grammy awards, and myriads of endorsement deals. She’s no doubt the real deal, and she still maintains her status as one of the highest paid female rappers around.

As of January 2019, Missy Elliot’s net worth was estimated at $50 million.

Dana Ownes, better known as Queen Latifah, is one of the pioneers, who laid the foundation for women in the American rap scene. She is a screen goddess, who redefined women’s position in the entertainment industry. And till today, she’s still reaping the reward, in folds.

Queen Latifah, who released her debut album in the late 1980s, is fondly called the “Queen of Rap”. And she has a number of Grammies to that effect. She was also able to make her name in Hollywood, with a number of starring roles under her belt.

Today, Queen Latifah’s net worth has been estimated in the region of $60 million.

Nicki Minaj, whose real name is Tanya Maraj, is arguably the highest paid and richest female rapper today. She’s been able to work her way from the very bottom – as a girl of Caribbean/African origin – to the very top of global music scene.

The star rapper has, so far, released three studio albums, in the midst of numerous mixtapes. Also, she’s featured in a number of Hollywood movies and a host of TV Shows. And her popularity has earned her mouthwatering endorsement deals with top global brands like Adidas, Pepsi and MAC among others.

Recent estimates put the rapper’s net worth around $72 million.