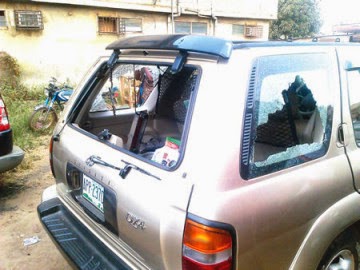 Some suspected political thugs from the Peoples Democratic Party, PDP, have unleashed terror on members of the All Progressives Congress, APC, staging a rally in Alimosho area of the state.

In the last four days, the attacks have spread from Agege, where an APC supporter was gunned down by suspected thugs of a PDP candidate in the area, to other parts of the state.

Agbado Oke Odo Local Council Development Area, LCDAs was the scene of another bloody violence allegedly orchestrated by supporters of the PDP.

Similar attacks occurred three years ago after the then ACN (now APC) won the council election in the area.

“A number of our members, Tunde Solaja, Nurudeen Olukowi, A. Tobi and Jenrola are lying critically ill in hospitals awaiting surgery to extract pellets and bullets shot at them by some agents of darkness adorned in the garb of political opponents. What were their offences?

“Their only crime, to the ever desperate and intolerant leadership and membership of the Peoples Democratic Party was their effrontery to express their rights to freely associate; to associate and identify with the ideals of a greater Nigeria as manifested in the programmes and policies of the APC in our bid to salvage our nation,” said Aderemi Adeyemo, Chairman, Publicity Committee, APC, Agbado Oke-Odo LCDA.