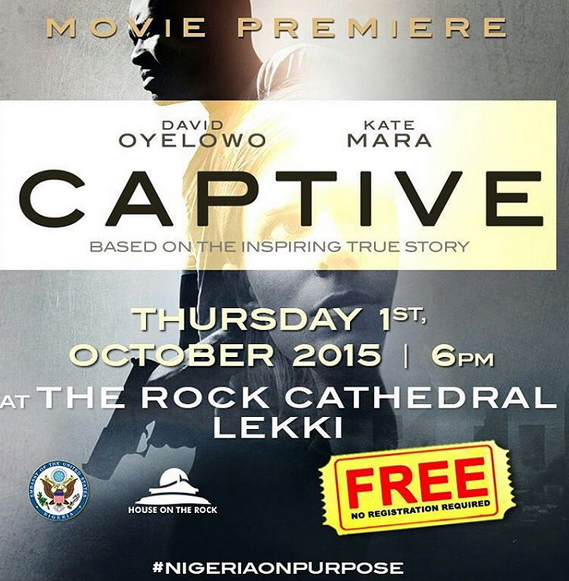 As Nigeria celebrates its 55th anniversary, The Rock Cathedral, in conjunction with the United States Consulate General, Lagos is set to offer Nigerians a taste of Hollywood with the premiere of the crime-drama thriller, Captive.

According to a statement from the US Consulate, the film which premieres at The Rock Cathedral, 4th Roundabout, Lekki-Epe Expressway, Lagos, by 5pm on October 1, ‘aims to awaken a purpose-driven life for all Nigerians.’

Captive is a story of faith, redemption, and survival, based on the non-fiction book Unlikely Angel by Ashley Smith. It is a true story about Brian Nichols, who escapes from the Fulton County courthouse in Atlanta on March 11, 2005 and holds Smith as a hostage. Filming began in October 2013 in North Carolina. The film was released worldwide on September 18, 2015 by Paramount Pictures.

Captive tells the true story of Smith using Rick Warren’s best-selling book, A Purpose Driven Life, to find her own path to redemption and persuade her captor to find his. British-Nigerian actor and Golden Globe Award nominee, David Oyelowo, who recently portrayed Martin Luther King, Jr. in the film Selma, and American actress Kate Mara (House of Cards, The Fantastic Four) are among the cast of Captive.