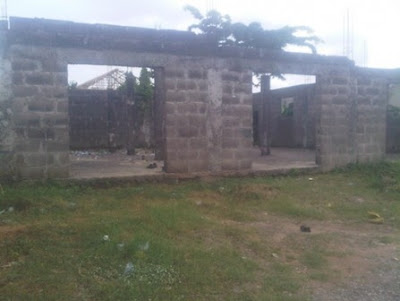 A young guy simply identified as Femi allegedly took his own life in Abaranje area of Ikotun Lagos this morning.

Femi was recently evicted by his landlord before he moved to the uncompleted building above.

According to residents of Alhaji Aboki street in Abaranje, Femi had tried to kill himself on two occasions but it didn’t work out.

Resident claimed that Femi popularly called Fela because of his musical talent had earlier jumped into a well and was rescued.

Last week, his landlord used police to evict him from his apartment at 27 Alhaji Aboki street after three suicide attempts.

He finally succeeded in taking his own life yesterday.

His corpse has been deposited at a mortuary in the area for autopsy.