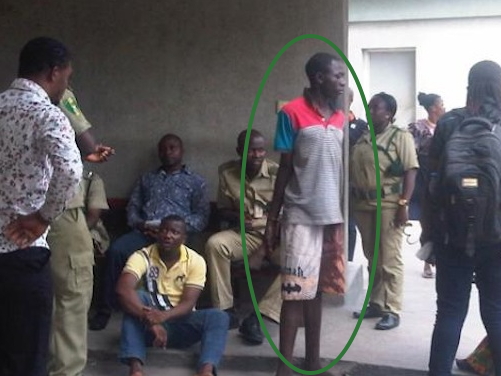 Police officials at the Onikan Division in Ikoyi, Lagos have arrested a 20-year old boy, Sarduna Onum who allegedly specialises in giving false information to the police in Nigeria that armed men attacked and robbed him of money and handsets.

Police alleged that the suspect have succeeded in the criminal act for about three years in Bayelsa, Rivers, Ogun and other states to deceive the police with false information which subsequently leads to arrest innocent members of the public he alleged robbed him, who though did not commit the alleged offence to compel them to refund the money and other items he alleged was robbed from him at the station.

Police alleged that nemesis caught up with the suspect when on 8 March, 2016 he went to the Onikan police Division, Ikoyi Lagos to lodge a complaint that some men robbed him of the sum of N100,000 and a Tecno handset at Ikoyi area of Lagos.

It was learnt that while the suspect was narrating his alleged false story to the police at the station, a newly transferred female police officer to the Onikan Division who in August last year investigated a similar case the boy reported at a police station in Bayelsa, raised an alarm and said the boy was a fraud, saying she had investigated a similar case for the boy in Bayelsa State and discovered that he was a liar.

Following the development, the female Divisional Police Officer in charge of Onikan Division ordered her men to arrest the suspect and investigate him.

During investigation, according to the police, the suspect allegedly confessed that he feeds on giving false information to the police.