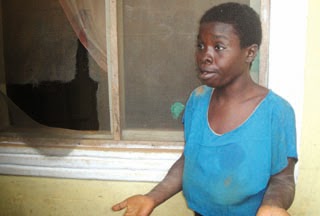 A homeless woman has been arrested while trying to steal a baby girl from her parents’ house early Thursday morning.

The 31-year-old stranger is currently being interrogated at Ajuwon police station for kidnapping.

The suspect, Blessing Aransiola, was caught by the girl’s father, Mr. Seye Adanri, 34, as she attempted to escape with the girl, Oreoluwa Adanri.

Narrating the incident to P.M News this morning at the Ajuwon Police Station where the suspect was taken to, mother of the girl, Mrs. Adebisi Adanri, 29, who lives with her husband at 21, Ademola Coker Street, Alagbole, Ogun State, said she was woken up by the cry of her daughter in the hands of the suspect around 4.a.m.

“She was trying to run away when my husband ran after her and caught her. I raised an alarm to draw neighbours’ attention to the incident and everybody came out to assist us,” Mrs. Adanri narrated.

She disclosed further that the suspect got into her house by tearing the window net.

“She picked up the baby as she was sleeping on the bed by the window and stole N5,000 kept in a purse,” she added.

But in her statement to the police, Blessing, who said she was homeless, denied stealing the baby and the money.

She told her interrogators that she was looking for where to sleep when she saw that there was a veranda near the window of the couple’s house.

“I was looking for a place to sleep when I saw the veranda. I was trying to sit down when the net got torn. I was wandering about, I didn’t steal any baby or money.

“Last year November I sustained injury on my leg and I couldn’t walk properly again. Later, I developed problems in my eyes and I couldn’t see properly again. Since then I have been moving about,” she stated.
She disclosed further that she was living at 5, Modupeola Street, Iju-Ishaga when co-tenants conspired against her and labelled her a thief, adding that this made the landlord to send her packing.

“I am not a thief. They accused me of kidnapping but I am not a kidnapper, I was just wandering about because I have nowhere to sleep. I did not kidnap any child,” she stated.

A resident of the area, Labinjo Abayomi, warned that the police at Ajuwon should not try to cover up the case, adding that residents were ready to ensure that the suspect was brought to book.

Another resident who identified himself as Soji Ademuyiwa commended the parents of the girl for not sleeping with both eyes closed, adding that but for their vigilance, the suspect would have taken the baby away.