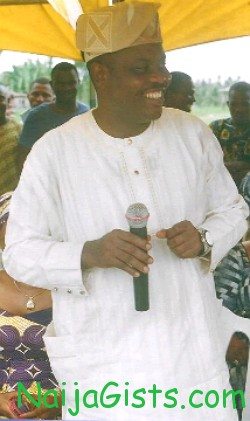 6 kidnappers on Monday kidnapped the mother of a lawmaker in Ogun State, Hon Abiodun Abudu Balogun demanding an undisclosed ransom before she would be released. Alhaja Obedatu Abudu Balogun, 72, was said to have been abducted from her residence at Ita-Otu, Ijebu Waterside Local Government Area of the state by the gunmen around 9:30pm. naijagists.com

Balogun’s mother’s kidnap came barely one month after a popular businessman and hotelier in the state, Chief Segun Oyebolu was kidnapped in front of his office in Ijebu-Ode area of the state. Alhaja Balogun’s son, Abiodun Abudu Balogun of the ruling Action Congress of Nigeria (ACN), represents Ijebu North, Ijebu East and Ogun Waterside Federal Constituency in the House of Representatives.

The lawmaker is the deputy chairman, House of Representatives Committee on Internal Security. Daily Sun could not confirm whether the kidnappers had established contact with members of her family, particularly the lawmaker, Mr. Balogun, whom police sources hinted was the main target of the hoodlums. Confirming what he described as an ugly trend, Mr. Balogun added that the incident was too painful for to him bear.

“It is bad development for me and my family. What I need as a person and the entire members of my family is prayer that would facilitate the safe return of our dear mother.” The state Police Public Relations Officer (PPRO), Muyiwa Adejobi, could not be reached for comments, just as a senior officer in the command’s Criminal Investigation Department (CID) said the command was yet to be informed about the kidnap.

“I have heard about the incident but officially we are yet to be briefed. However, we have asked our men to be on alert.” (Sunnews)