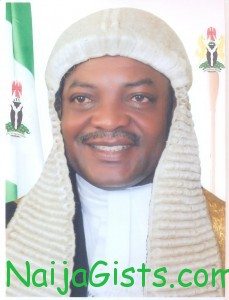 At the sitting of the members on Thursday, which was presided over by the deputy speaker, Honourable Stephen Omeje, the members had unanimously signed the impeachment notice of the speaker.

Based on the impeachment notice signed by 29 out of 30 members of the assembly, Honourable Baba Ode, representing Otukpo constituency, had moved a motion for the impeachment and cited relevant Section of 1999 Constitution, which he said, gave the assembly power to remove the speaker and was seconded by Benjamin Adayin of Makurdi North Constituency.

According to Ode, the members alleged highhandedness, gross financial impropriety and misrepresentation of members before the executive against the speaker, with no objection from the members as the deputy speaker declared the seat vacant.

The Speaker was said to have initially tendered an unsigned resignation letter after all entreaties to the assembly members failed probably to buy time for reconciliation which brought in the deputy governor, Chief Stephen Lawani.

Meanwhile, in the process of electing the new speaker to fill the vacant post, a young man jumped from the gallery into the main chamber where the members sat and was guided out by the clerk of the house only for the young man to lead some thugs, numbering 20 into the chamber, snatched the mace, guided and bundled the speaker into his car and drove away while security operatives watched helplessly.

The thugs who later took control of the chamber turned the complex into battle field and beat members and other people while members, newsmen and staff members ran for safety.(Credit: Tribune)