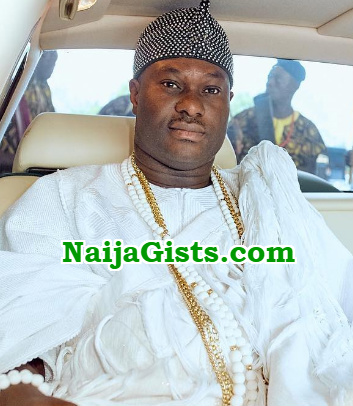 May 20, 2017 – In Honour Of The Leader Of All The Yoruba kings, Ooni Of Ife, His Royal Majesty, Oba Adeyeye Enitan Ogunwusi, Ojaja II

TO BELITTLE, YOU HAVE TO BE LITTLE!

“Pride must die in you, or nothing of heaven can live in you”- Andrew Murray

Prudence Kohl once said, “The search for self-worth begins by finding what is indestructible inside, then letting it be.” There is a Yoruba adage that says that when a child washes his hand properly then he can eat with the elders. In a clear translation, it means that when a child conducts himself properly, then he can hobnob with people that are far beyond his age. From all clear indications, the present Ooni of Ife, his royal majesty, Adeyeye Enitan Ogunwusi, is a man far beyond his age in terms of maturity and in his tactical approaches to handling very knotty issues. At the age of 42, the Ooni looks 32 and conducts himself like a 62 year old!

The legendary Spartan King, Agesilaus II said, “Royalty consists not in vain pomp, but in great virtues”. Most times we adduce royalty to those with the so called ‘royal blood’, but there is a king that has arisen among us; he is not just a king by blood but a king in character, a king in spirit! The true evidence of royalty is not the blood-line but character. Royalty is useless when character is lacking. One of the greatest fashion geniuses to walk the earth, Gianni Versace said, “In the past, people were born royal. Nowadays, royalty comes from what you do”.

It is savage madness to think you can increase your stature by making others feel smaller. The Bible seriously admonish the youths in 1 Timothy 4:12:“Let no one despise your youth, but set an example for the believers in speech, in conduct, in love, in faith, in purity”. In order to maintain a healthy self-image, there are three core principles that must always be upheld: “Don’t ever look down on yourself”; “Don’t ever allow anyone to look down on you”, and “Don’t ever look down on anyone”. The greatest asset to have in life is a healthy self-image. A healthy self-image is seeing yourself as God sees you. The most secured people are those that derive their sense of worth and security from within. It is a fundamental truth of life that no man will value you more than you value yourself.

In one of his best-selling book, The Prophet, Khalil Gibran, one of the brightest poets that the world has ever produced said, “To belittle, you have to be little.” Some few weeks ago, a short video clip showing the height of impunity and denigration to the royal office of Ooni of Ife went viral. The way and manner that the Oba of Lagos greeted the Ooni could be likened to a snub or even something more degenerating. It got messier when one of the white cap chiefs, Lateef Aderibigbe Ajose, Opeluwa Onido of Lagos, said the Lagos Monarch did not ignore Ooni of Ife at the public function as being misconceived by people. He said Oba Akiolu’s response to Ooni is the culturally acclaimed way of greeting by a monarch in Lagos! He even added that the Lagos King is basically trying to revive the culture and tradition of ancient Lagos which is peculiar to the State. What insolence! If the way he greeted the Ooni is a culture, then that culture need not be revived but buried permanently. I want to categorically say that the Yoruba culture is enmeshed in deep respect and adoration for people in high authority.

The Ooni of Ife has shown severally that the privilege of being a king must never be abused. The face of modern ‘authority’ is not to turn subordinates to stooges but rather to serve people with deep humility. My sense of perception may be wrong but I think what happened between the Ooni of Ife and the Oba of Lagos is a deeper reflection of the way the Oba of Lagos treats people. Another pitiable inference from this is the way leaders treat the people under them. Leadership is a call to service and not hold followers down in servitude.

The greatest asset to have in life is a healthy self-image. According to Rev. Olusola Areogun, “Knowing your identity is the first step to overcoming defeat and failure in life”. The most secured people are those that derive their sense of worth and security from within. I have come to realize that a healthy self-image is crucial to navigating through some of the most demeaning and spiteful occurrences in life. Our self-image is always a target of attack from image poachers and ‘emotional vampires’ but we must never let down our guard. We must vehemently refuse to be intimidated. That you are a youth shouldn’t be an excuse to overlook ungainly and disrespectful treatment from anybody, no matter who they are!

Brian Tracy said, “Self-esteem is the reputation you have within yourself. His royal highness, the Ooni of Ife preached a very short message through the short video clip. He made us to fully realize that our value does not decrease based on someone’s inability to see our worth, as he went on exchanging pleasantries as if nothing happened! Never let someone else’s opinion of you become your reality. Your self-worth determines your net-worth.  Eleanor Roosevelt said, “Nobody can make you inferior without your own consent”. The easiest way to open yourself to abuse is trying to find your worth, acceptance, security and love outside of God. When identity has not been ascertained, abuse is inevitable.

I am reaching out to the youths out there in the words of Mark Twain: “Keep away from people who try to belittle your ambitions. Small people always do that, but the really great make you feel that you, too, can become great”. When you learn how much you are worth, you will stop giving people discounts. Endeavour to surround yourself with people that affirm your worth. Don’t allow anybody to despise your ‘youth’!

Tim Fargo said, “If you want to improve your self-worth, stop giving other people the calculator”. A great lesson from his royal majesty, Adeyeye Enitan Ogunwusi, can be summed up in one sentence: When you know your worth, no one can make you feel worthless. Accept no one’s definition of your life; define yourself. We must never withhold giving respect to whom it is due. It is an undisputable fact that the Ooni is the supreme ruler of Yoruba land and he doesn’t need to prove this. I was reading through some feed backs on the social media and there was an apparent conclusion on how the Oba of Lagos denigrated the office of the Ooni of Ife but I have a different opinion on this: The carriage of Ooni Ojaja after Akiolu’s snub was royalty in every sense. In fact, the Ooni was more royal after the snub than before!

Dave Willis said, “Show respect even to people who don’t deserve it, not as a reflection of their character, but as a reflection of yours.” I admonish the youth to always go extra mile to honour the elders and people in authority. The culture of respect, decency and humility must never be negotiated at any cost; any culture that down plays this should be outrightly discarded. Nothing is lost that is done with respect. One of the Yoruba adages that I love so much captured this succinctly: “Paying obeisance to a dwarf does not, in any way, demean your height”. I must put this up for the record: I never, ever referred to any royal father as a dwarf.

Spencer Kimball said, “Humility is royalty without a crown. Humility is greatness in plain cloth”. I really want the youths out there to emulate the core values of humility and simplicity that have set the Ooni apart from the rest. Dr. Myles Munroe said, ‘’Humility is not the degrading or reducing of oneself in the estimation of another, but rather the awareness, acceptance and appreciation of one’s worth and value’’. Ooni of Ife has been exemplifying the virtues of respect and deep humility worthy of emulating at different occasion and events. Youths! Be humble or you will stumble!

I dedicate this piece to the Generalissimo of all the Yoruba kings, Ooni of Ife, His Royal Majesty, Oba Adeyeye Enitan Ogunwusi, Ojaja II. We are so proud of you in character and carriage. You are a worthy ambassador of the youth and an epitome of true royalty. Benjamin Disraeli captured your person in one of his quotes: ‘’The greatest good you can do to others is not just to show your riches but to reveal to them their own.’’  You have shown us that true riches are not ‘material’; it is all about the way we treat people.

QUOTE OF THE WEEK: ‘’The only person who can pull me down is myself, and I’m not going to let myself pull me down anymore.”- C. Joy Bell C