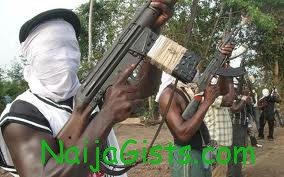 Dec 29, 2011 – How A Female Undergraduate Escapes From Ritualists

A 2nd year (200-level) student of the University of Benin, Edo State, Miss Sandra Balogun, has narrated how she escaped from ritualists’ den in a bush near Lisa in Ogun State, Southwest Nigeria.naijagists.com

According to Sandra, 18, her neighbour at Abesan Housing Estate, Ipaja, Lagos lured her to a two-room apartment in a bush around Lisa village where he handed her to the ritualists.

She said: “my neighbour (name withheld) lured me to Ijoko area of Ogun State, pretending that he will help me to release a music album because I am also a good singer. After Ijoko, we trekked through a footpath to reach Lisa village.

“When we got to the isolated two-room building, the suspect handed me over to the ritualists saying, ‘this is the girl’ and he disappeared”.

She stated that her captors took her to a canal where they washed her head. Then she was taken to a room and a liquid substance was given to her to lick. When she refused to lick the liquid, Sandra claimed her hands were tired backwards.

She disclosed that after she was forced to lick the liquid substance, she was left alone in a room. She said the kidnappers later came with another victim.

“They opened the door and later took the victim away to the canal to perform head washing ritual,” she said, adding that this afforeded her the opportunity to escape.

Sandra said she reported the incident to her father and Sango Ota Police Station and the neighbour who lured her to the bush was arrested.

When the suspect led a team of policemen from Lagos and Ogun state to the hideout of the suspected ritualists, they jumped into the canal and escaped. But a woman said to be the wife of one of the ritualists was arrested and is now in police custody.

Sandra told the police that the ritualists stole her N61,000 and her laptop, adding that her father gave her the money as part of her school fees.

The two suspects are currently assisting the police to arrest the fleeing ritualists.

Lord Have Mercy ! These ritualists are so heartless