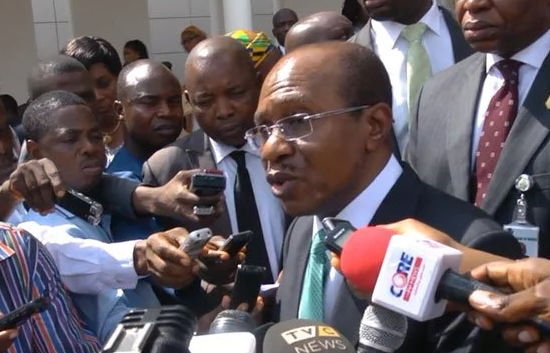 October 1st, 2016 – How CBN Governor’s Wife Was Kidnapped In The Presence Of 4 Police Escorts In Edo State

Uneasy calm gripped the kinsmen of the Governor of the Central Bank of Nigeria (CBN), Mr. Godwin Emiefele, at Agbor, Ika South Local Government Area of Delta State yesterday, following the alleged kidnap of his wife.

Pandemonium erupted when the news of her kidnap filtered into the streets of Asaba and its environs yesterday after the factional group of the Peoples Democratic Party (PDP), led by Senator Ali-Modu Sheriff’s Deputy National Chairman, Cairo Ojougboh, inaugurated the 25 party council chairmen in Agbor.

The victim, the Saturday Telegraph gathered, was abducted after she alighted from the flight she took from Abuja to Benin, Edo state, and was being escorted to her husband’s home-town in Agbor, Delta state. A family source, who pleaded anonymity, wondered how the woman was whisked away in the presence of four police escort.

While she sensed an insider-game in the abduction saga, he maintained that “somebody who knows about her journey from Abuja to the village (Agbor) masterminded her kidnap.” He disclosed that the town’s vigilante groups and other relevant security agencies have since combined efforts to rescue her unhurt.

According to the source, the hoodlums ambushed the victim around Ighoneki axis of Edo state, along the ever-busy Benin-Asaba- Onitsha Expressway at about 2.30 to 3p.m on Thursday, and they have since thence remained incommunicado.

While he prayed that the kidnappers open up discussion or negotiation with her family members, he said the incident has thrown the kinsmen of the victim and those of her husband into trauma. But when contacted, the state’s Police Public Relations Officer (PPRO), Celestina Kalu, a Superintendent of Police (SP), denied the kidnap saga, stating that: “The command is not aware of such thing.”

On why the police in state claimed ignorance about the saga, another family member of the victim in Agbor, said:

“It was because the kidnap didn’t occur within their jurisdiction. It was within an agrarian town in Edo State. “So, the PPRO cannot confirm what did not take place within their command.

More so, if the command should confirm it, it burden will be on them to provide rescue and other modalities. It is like shifting the blame game to Edo Police Command.”

SaharaReporters had reported that Mrs. Emefiele was kidnapped along the Benin-Agbor Road. Our source disclosed that the kidnappers have made contact with their victim’s husband, adding that they were demanding a huge sum in ransom.