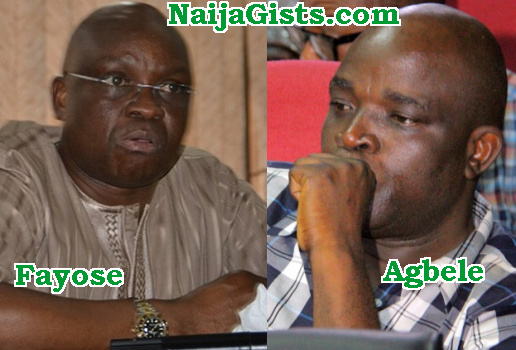 The first Prosecution Witness in the resumed trial of Abiodun Agbele, an ally of Governor Ayodele Fayose of Ekiti State, yesterday told the Federal High Court sitting in Abuja how the defendant lodged N1.2 billion in Zenith Bank.

The money was said to have been part of the N4.7 billion that was siphoned from the Office of the National Security Adviser (ONSA) and deposited into the bank account of Sylvan McNamara, a company allegedly owned by the sons of a former Minister of State for Defence, Senator Musiliu Obanikoro.

The witness, Alade Sunday, who is the head of Akure branch of Zenith Bank, while being led in evidence by Prosecution Counsel, Wahab Shittu, told the court that on June 17, 2014, his Zonal Head, Abiodun Oshodi, informed him that he received a message from one Lawrence who is a Zonal Head in Oyo State that a customer of the bank will be coming with money to Akure branch. He added that since he is the head of Akure branch, he was informed to arrange for bullion van to be taken to the airport to convey the cash when it arrives.

“After about one hour, my zonal head walked to me that Mr. Agbele was in the bank with him. I followed him to his office and he introduced him to me as the customer. “When we got to the airport, we waited for some minutes before the aircraft arrived with some occupants and one of the occupants was a former senator, Musiliu Obanikoro and one other person who I do not know. “When the occupants came down, Mr. Agbele walked to meet them and they discussed before the cash was put in our bullion van and we drove back to the branch with him.

“When we got to the branch we counted the money; it was about N700 million and Agbele told us that more money was still coming,” he stated. The witness also told the court that in the evening of the same day, they went back to the airport, got the remaining money and went back to the branch and that at the bank, they counted the money and added it to the first money which amounted to N1,290,000,000.

He added that the money, which was moved in two tranches, was stuffed inside Ghana-must-go bags. The witness said he was among the team that evacuated the money to the bank with a bullion van after it was flown to the Akure airport in a medium-sized aircraft by Obanikoro.

“The driver that drove the bullion van on that cash pick-up engagement was Olaolu Omotosho. I do not know the registration number of the aircraft, but the colour is metallic grey. “I was able to recognise Senator Musliu Obanikoro since the appearance resemble his picture that I used to see on the television or newspaper, but I cannot recognise the third person that came out of the aircraft with him.

After the testimony, prosecution counsel, Shittu, prayed the court to mark the PW1 statements made at the EFCC office as exhibits and also apply for a date for the PW1 to come back and complete his testimony. The defence counsel, Mike Ozekhome (SAN), did not object to the application made by the prosecuting counsel.

The trial judge, Justice Nnamdi Dimgba, however endorsed the statements as exhibits AA1A, AA1B, AA1C and AA1D. The court later adjourned the matter till November 14 for continuation of trial. Agbele was reportedly arrested on June 27 for his role in the handling of over N1.2 billion on behalf of Fayose during the Ekiti State governorship election two years ago.