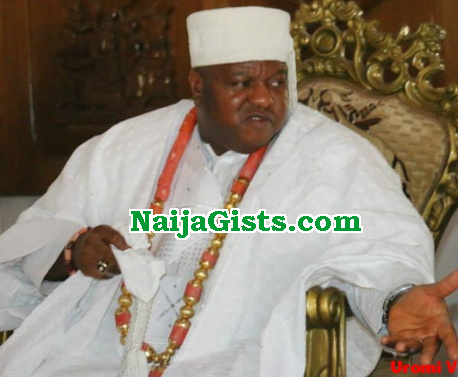 On Thursday, the governor of Edo state suspended His Royal Highness, Anselm Aidenojie, the Onojie of Uromi from office for attacking an innocent woman.

Oshiomhole action came after a meeting of the state executive council on Wednesday at the Government House in Benin City.

We learnt that the decision to suspend the monarch may not be unconnected with his alleged attack on one Mrs. Betty Okoebor, during the governorship election held on September 28, 2016 in full public glare, an action the state government described as not only distasteful, but unbecoming of a traditional ruler.

The twist in the case came barely 15 days to the end of the eight-year tenure of Governor Adams Oshiomhole, who will be handing over to Governorelect, Mr. Godwin Obaseki on November 12. 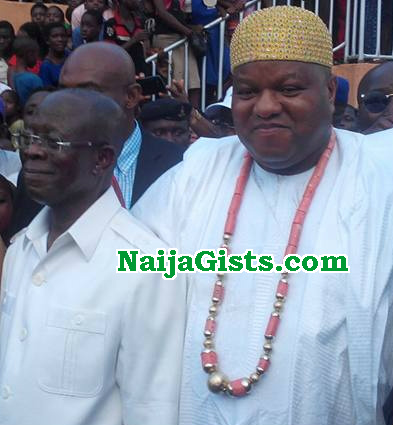 According to a letter signed by the Secretary to the State Government (SSG), Prof. Julius Ihonvbere, dated October 26, 2016 titled; “Suspension from Office as Traditional Ruler,” said:

“I write to convey to you, the decision of the Edo State Executive Council at its meeting on the 26th October, 2016, suspending you from office for seven days as Onojie of Uromi.

The suspension from office was based on, among other reasons; “Your unprovoked attack, inflicting grievous bodily harm on one Mrs. Betty Okoebor, on September 28, 2016 in full public glare to the embarrassment of those present and causing disgrace to your otherwise esteemed office. “Your refusal, even after two weeks, to respond to a query issued by the appropriate authority within the stipulated 72 hours, demonstrating total disregard and disrespect for constituted authority.”

And for “traveling outside the country without appropriate permission in further demonstration of your disregard for extant regulations and laws. “In the circumstance, the State Executive Council has arrived at a conclusion that these and other acts of misconduct of Your Royal Highness, the Onojie of Uromi, are not only distasteful, but also unbecoming of a traditional ruler of your status.”

Continue Reading
You may also like...
Related Topics:onojie of uromi suspended