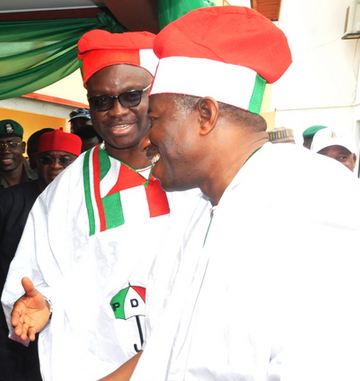 How Fayose Used Jonathan,Thugs Armed With Charms & Acid To Stop Us From Impeaching Him – Omirin

A lot of people expected that the impeachment plot against Governor Ayo Fayose would sail through due to how high the tempo was, but to the amazement of everyone, it didn’t see the light of the day. What happened, sir?

The fact that the impeachment did not sail through is only a fact to bear on the kind of coun­try we have. It is a country where impunity goes on like that and nothing happens otherwise how do you imagine a governor blocking the entire roads leading to the state, falling tress and block­ing the roads with trucks? Ekiti was virtually a banana republic and nobody could caution the governor, not even the former president. In fact, former President Jonathan was supporting him, otherwise, there was no reason 19 honourable members could be driven out of the state while seven were making laws.

Fayose was doing that with the support of the former president because he (Jonathan) did the same thing to the Governors Forum where 16 was bigger than 19. So, there was no way he could caution someone who was doing something similar to what he did. By the time the new president came in, maybe he felt it was too early for him to get involved in such crisis, he did not say anything about it. The police in Ekiti State also supported Fayose by not allowing us enter Ekiti. I remember one day that we were trying to enter Ekiti, the Police Commissioner told us that he could not guarantee our security.

I am talking about Lakanu. If the commissioner of police can be telling us that he could not guarantee our safety coming into the House, what were we supposed to do? I was almost assassinated sometimes ago and I put a call to the Commissioner of Police. Before he could come and rescue me, he took permission from the governor and it was as bad as that. After the entire incident, he denied there was something of such when he had already confirmed to me that he met an unnumbered hilux vehicle owned by the government.

Fayose was able to mobilise the drivers and the thugs and they were brandishing cutlasses, acids, guns, freely in Ekiti State without anybody cautioning them. So, for us to go into the state was like one running after a moving train and I didn’t want to lose any of the 19 honourable members. I didn’t want to lose my life either and that was how we could not enter Ekiti State. That was how the impeachment plot could not succeed.

Many believe that despite the rancor between your team and Governor Fay­ose, you were always going for negotia­tions and both of you were playing some games against what we knew. Even the Speaker of the seven said that you once tried to lobby faction of him at a point. What is your reaction to this?

As far as I am concerned, all those are lies. I put a call to Fayose on the eve of the day I was almost assassinated. He had put a call to me on January 1st from Dubai to congratulate me on the New Year. He cracked jokes about Christmas gifts for me and to my greatest surprise, as soon as he got to Nigeria, he said I was begging him for Christmas gifts. Someone I hardly call and I won’t call him for anything because I need nothing from him.

The last day I spoke to him was when the Com­missioner of Police said I should do so and since that day, we never spoke face to face or even over the phone. The next time I would call Fayose was on the 11th of May when we were about entering Ekiti. I told him I wanted to make him a hero that he would be the first governor that would kill 19 honourable members because we were coming to Ekiti the next day. I called the Commissioner of Police and the Director of SSS and told them the same thing.

These were the only two occa­sions I had contact with him and at that point, he was so remorseful, pacifying me that we should make peace and come together. After my discus­sion with him, I called the 19 honourable mem­bers to tell them about my discussion with him and that we should meet him and hear what he had to say. Before then, I called our leaders, Dr. Kayode Fayemi who cautioned me that I should be careful even if we would go, that the person we were deal­ing with could blackmail us. I also called Engineer Segun Oni who also said the same thing. Eventu­ally, five of us were selected and apart from that, I didn’t have anything to do with, him secretly or openly. I challenge him to produce any text mes­sage or call I had with him except the ones I just said.

That evening, about 8:30pm, he sent a mes­sage to me and said “Mr. Speaker, how was your day? I hope you went back home safely to your place in Osogbo or Lagos. Have a good night”. He was obviously mocking me that we didn’t succeed in getting into the state. I replied him and said “Mr. Governor, there is nothing that has a beginning that doesn’t have an end. You are auctioning God today, but you are not God. You may be enjoying the spell you cast on Ekiti people, like Pharaoh, but the Moses of Ekiti will stand up one day. It is not over until it is over. Have a good night”.

With that, will someone say I have a relationship with him? I have nothing to do with Fayose and I never negotiated anything with him. Some even said I used my petrol station to negotiate with him. Has he opened it now? So, the people that are peddling the rumour did not actually know what transpired. The problem we had was that of security and noth­ing more.