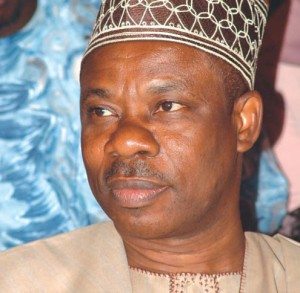 During his inauguration, Governor Ibikunle Amosun of Ogun State promised that his administration will give attention to sectors like Education, Employment, Agriculture, Social amenities and other things that his predecessor failed to achieve during his tenure special. Almost a year into his government, however, the people of the state are still in the dark as to when he will fulfill his promises to them. naijagists.com

Rather than work to achieve his electoral manifesto, he is busy going after the property and businesses of his perceived enemies. He is also said to have promised most of his aides that weathered the storm with him during his time as a Senator while he was vying for the governorship seat, that he was going to compensate them for their loyalty, but all these seem unattainable because the governor has failed to keep the promises he gave when he was contesting.

According to Global News Magazine, so many allegations are trailing the Governor and his government. For example, rumour has it that all the official cars bought for members of his cabinet which should ordinarily be public property were all registered as private vehicles of these people. It was also revealed that SIA, as he’s fondly called, has appointed members of staff in his private firm as special advisers and special assistants, and they would be on the payroll of the state government for the next four years. Another is his alleged plan to reduce the work force in the state.

One of such moves towards the reduction of the labour force was the obliteration of Tai Solarin University of Education done some weeks back, merging it with another state-owned university. Several efforts have been made by the institution’s leaders and students to convince him to reverse the merger to no avail. Also, sources hinted, in a bid to keep up the retrenchment exercise, the Speaker of the Ogun State House of Assembly (OGHA) has concluded plan to retrench all local government staff employed under two years ago under the former governor in his own consistuency ,Yewa North local government.

To people’s chagrin, the issue of job opportunities that was assumed he took dearly to his heart has been taken with levity and carelessness. He promised that 15,000 graduates will be provided with jobs in the state within his 100 days in office. Some weeks after his 100th day, a list of 5000 was released and people were very disappointed. ‘It all looked like magic. You would find people with the same surname in one list whereas other people’s names were nowhere to be found. This Governor is definitely trying to please some people he has made promises to at the expense of other people,” one of the job seekers lamented. Months back, when a 5000-name list was pasted, the same thing happened.

On the issue of Education, he made a pledge to most of the tertiary institutions in the state, especially the school where he happens to be an alumnus, Moshood Abiola Polytechnic Abeokuta, that he would reduce school fees. But it seems as if he is still building castles in the air.

It was gathered that governor of the Gateway State is still accusing the former governor of emptying the state purse, selling most of the state property and diverting money realized into his personal purse.

A lecturer in one of the higher institutions in the state divulged that the governor can’t achieve the promised reduction in school fees because even when the fees were not reduced, the government still found it difficult paying the lecturers salary. So the issue of reduction should be set aside. The same exorbitant fees regime still subsists.

Governor Ibikunle Amosun was allegedly accused to have spent N2.5 billion to provide text books for secondary and primary school students, and N256 million for a unified exam conducted recently. It was revealed that the Ministry Education is one of the avenues through which SIA plunders Ogun State funds.

Rumour mongers allege that the Federal Government plans to reimburse all the money spent so far on the federal roads by all states. In lieu of this, a sum of N4 billion will be reimbursed into the state government coffers by the for Federal roads done by Ogun State Road Management Agency (OGROMA) by the Gbenga Daniel administration in Ogun State. It is on record that N2.8billion was paid to the state for Environment issues a couple of weeks ago.

Couple of months back, people of the state went on strike over increase of taxes. Workers in the state were wailing that their taxes had been tripled; still payment of workers’ salary isn’t regular. According to the information at our disposal, over N12 billion was allocated to Ogun State from the Federation Account.The question is, how is this governor spending the funds allocated to Ogun state.

It was alleged that instead of fulfilling the promises he has made, he is just attending to personal and social matters.