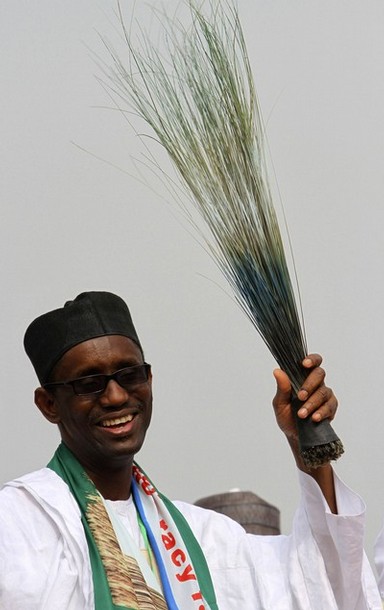 It is not over until it is finally over, this is the driving force behind men of valour, and one of such individuals is General Muhammadu Ojochenemi Igomaganya Buhari, his doggedness in the face of difficulties, self discipline, steadfastness, contentment amist riches, self-belief system and good sense of honour remains his greatest philosophy, thus not how far but how well.

Personal greed is a barrier to peaceful ending, individual credibility or integrity could easily be wiped across the surface of the earth by this singular factor, quick to remind us is Mallam Nuhu Ribadu, what a galant officer he was in the Nigeria Police? to the extend that he was rewarded with exotic position in EFCC by the then President- Olusegun Mathew Aremu Obasanjo, the fear of Ribadu was the begining of wisdom for looters, he was revered by coleagues and this earned him more respects by Nigerians due to his couregeous fight against perceived corrupt officials, there is no doubt during his time as EFCC boss he performed above average even though such actions were largely regarded as selective justice against the perceived enemies of government, in whatever way you look at it, OBJ time was better than GEJ’s time where corruption is still regarded as mere stealing, Ribadu rode on the crest of credibility to run for Presidency in 2011 under the platform of ACN which later metamorphose into APC along other political parties, though he was not expected to win but that was a good shot.

Ribadu! Ribadu!! Ribadu!!! Where did you get it wrong? Without fear of favour, I stand to say he Ribadu was consumed by greed and quest for political shortcut, formally of APC he foolishly joined PDP thinking GEJ popularity and largesse are enough for him to coast home victory in Adamawa State, ordinary for someone who contested for a number one seat in Nigeria, going for Governorship should be regarded as a consolidation but he missed it all, his timing was wrong and to worsen his political woes, he lacks patience and betrayed the party who nurtured him when he was nobody politically.

Alas! He was destroyed by Buhari tsunami, in fact Mallam Nuhu Ribadu remains the orphan of 2015 election and by the time he look at his friends such as Governor Nasir El-Rufai and the likes, he shall continue to regrect his action till the end of time, who knows he might even have been rewarded as EFCC Chairman again should he remain in APC.

Finally, the lesson from this political episode is that integrity pays as good name is better than riches, it is written in our scriptures that what shall it profit a man to gain the whole world and looses his soul in hereafter? GMB is a typical example, He had oppurtunity to loot the unlootable when he was privileged to manage this country, formal Head of State, a formal Governor, PTF boss to mention just these, but he never did or cut corners to satisfy his selfish ends, today He is our President-Elect by Allah’s permission, money wise, education, age, power and influence.

He dared not compare himself with GEJ yet Nigerians prefer him to the later, this goes to show that good name is honour.

Oh Lord grant GMB good vision to live up to his promises as well as good health.