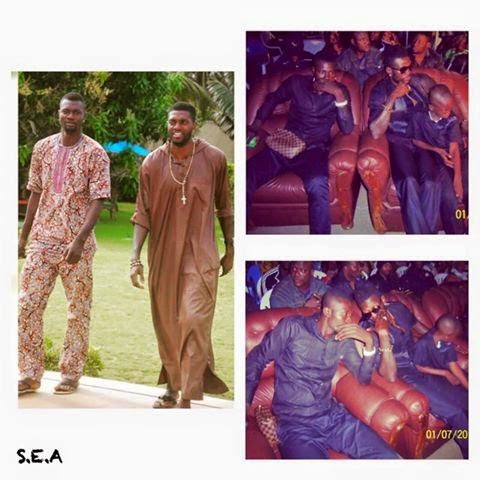 Still on footballer Emmanuel Adebayor  and his family problem.

Days after his brother, Rotimi called him out for exposing the family secrets to the media, Mr Adebayor is back with another never been revealed secret of his brother.

Here is another part of the story I have kept inside since. Today I feel the constant need to let it out. If I share my stories, it is because I believe every story comes with a lesson. And the lesson is for anyone that is reading this. This is about a brother who keeps saying today that I am not a good support for our family. His name is Rotimi Adebayor. At the age of 13, he did something very bad. He and I know what he did. Because of that our parents had to send him to a village far from the big city.

When I started to be successful in football and I went to Togo for vacation; at that time one of my mother’s friend came from the village to visit us.
As she explained how Rotimi was suffering in the village, I immediately asked them to bring him back into the city. As soon as he came back, I made sure I put him in school.

So I decided to take an amount worth 3 months of my wages and I bought her a Cartier neckless for about €45,000. Rotimi and his friends Akim(@Yam Freedom) and Tao (@Sao Tao Oyawole) made a plan and stole that precious neckless. They sold it for about €800. When my mom and I found out, my mother asked me not to bother because he is the younger brother. Despite the situation, I would like to take this same occasion to wish all the mothers out there a Happy Mother’s Day!. And the lesson is for anyone that is reading this.

In my house, I have a storage room where I keep some of my belongings when I travel back to Europe. I am the only one with that key but my brother managed to get a master key that was able to open every single door in the house. He frequently stole drinks and other items from that room.

After all this we kept saying “blood is thicker than water” and we moved on. Therefore, I decided to take him where I started my football in France. I brought him to a great football academy in France. You already know how this story ended. He stole cellphones from many of his teammates and they sacked him from the football academy. By the way, after I published the first story about him, he called me to say that he did not steal exactly 21 phones. He claimed that the number was lower than that. Still…Is that acceptable? He also added that I should be happy that he stole drinks and other items from my storage room. I asked him why and he replied: “Because I am your brother”.

Jacques Songo’o who is now a retired Cameroonian footballer also had his son in the academy and he was a good friend of Rotimi. Let me add that he was part of my development as a footballer and he always gave me good advices. I was in Togo on my days off when Songo’ocalled me; he sounded very angry. He explained to me how my brother stole his son’s PSP. When I asked my brother why he did that, he argued that he forgot it in his bag. How can you forget someone else’s device in your bag and travel with it from France to Togo? Since that day, my relationship with Songo’o changed and he has become pretty distant with me and my family.

I was still in Monaco when I decided to collect all football boots from my teammates so I could give them to people in Africa. I had a huge bag full of shoes. I brought that bag to Togo. A few days after when I decided to give the boots out to the people in need, I noticed the bag full of boots disappeared. Later on, I found out that my brother was the one who stole the bag and went to sell the shoes in Hedzranawoé (famous public market in Togo).

One day, my mom called me early in the morning when I was still in bed. She told me that Rotimi has gotten a Visa to go to Dubai so he can play football out there. He had to leave that day with his friend Kodjovi (@Denilson de Souza) who was in the same situation. It was either they went that day or the Visa would be suspended. I asked one of my guys at the time (@Agui Mozino) to go find tickets for my brother and his friend.

We could not find any economy class ticket on that day so I had to get them both first class tickets. After all, it was an opportunity for him to make his own career in Dubai. Only 4days later, Rotimi went back home. He explained how the lifestyle in Dubai was not made for him. He said he wasn’t free to do what he wanted to do because it is a strictly Muslim place. He couldn’t drink, party as much as he wanted or kiss girls in public.

The part 3 is coming out soon and it will be about the man that calls himself the father of the family @Kola Adebayor A.K.A Lion of Judah.

Emmanuel Adebayor please forgive your family members, stop washing their dirty linen in public, if someone is advising your to do this, you need to stop urgently. This is not a way to resolve a family dispute.

Continue Reading
You may also like...
Related Topics:emmanuel adebayor, family