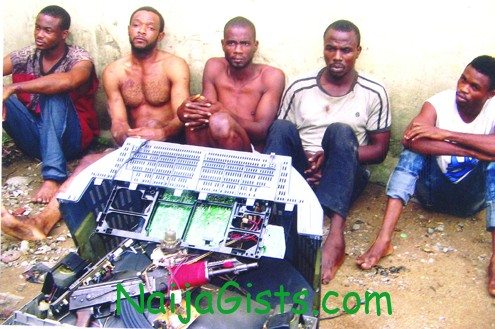 The recent deadly robbery incident in Lagos has brought to the fore the silent pains of some residents who had lately been faced with security challenges. naijagists.com

Although many would agree that the relative peace of the state was disrupted by the incident that left six persons dead and some others robbed of their goods and cash, however, some residents, particularly in and around Victoria Island, Agungi and the many estates along Lekki-Epe Expressway, expressed no surprise at the development.

Some of the residents said that they had endured terrifying experience with armed robbers in neighbourhoods and on the highways for a while, prior to the recent deadly attacks across Lagos, but were not taken seriously by the government and the police.

Therefore, police failure to curb the trend has been blamed for the chaos that unfolded across the state on September 9.

“It only shows that the robbers have grown in confidence,” said a victim of an armed robbery incident in his Victoria Island residence, three weeks ago.

In the ordeal that lasted about an hour, the victim said he lost some cash and gadgets to the AK-47-wielding gang.

About two months ago, a Diamond Bank Plc Director was reportedly robbed at Oniru estate in Victoria Island, where two ladies were also said to have been raped by a suspected robbery gang.

Just last month, the remains of a robber, who was reportedly part of a gang that had brazenly attacked and killed two officers of the State Security Service (SSS) at an Alpha Beach hotel, made a spectacle at the Ilasan Police Station, Jakande, where he was taken afterwards.

Mohammed, an eyewitness working around the police station, said the rest of the armed robbery gang escaped following a shoot-out with some police officers on patrol. He also noted that reported cases of carjacking had been on the increase around Victoria Island and Lekki.

In May, Adaure Achumba, journalist and blogger, along with her friend, were robbed of their cash and phones at gun point while having a ride around Victoria Island.

Describing their mixed experience with the police afterward, Adaure said that some officers were uncooperative, while those eager to assist were ill-equipped to coordinate an effective chase, even while her phone’s tracking device displayed the robbers’ movement.

“As I reached deep inside me for my survival skills, the guy with the gun kept running towards us and pointing the gun,” she said, narrating her ordeal.

Such has, however, been the lot of some residents in these so-called rich neighbourhoods of Lekki, Ajah, Ikoyi and Victoria Island, with many now living in fear of being killed, robbed, assaulted or raped in their own homes.

Investigations also revealed that many of the car thefts have been occurring in the night, to residents nightclubbing or returning from work late.

The fear of armed robbers…

A recent victim, who did not want his name published, noted that many victims are afraid to share their experience with anybody, particularly with the press and the police.

Victims, according to him, are scared to have their faces or names on TV or in print, lest they get another visit from their assailants.

“It’s also a problem when the police are not in a position to help you or respond to where robbers are within 20 minutes, you cut your losses and move on,” he added.

Even though the Lekki Scheme 1 Residents’ Association said the spate of robbery incidents within the estate had reduced, Peter Taiwo, a member of its Environmental Taskforce identified a major threat to security in the greater Lekki area.

Lekki area is largely at a developmental stage, with reconstruction and new structures of various land uses springing up, almost by the day.

Taiwo said enough attention had not paid to the “kind of people that the construction efforts are drawing” to the estates, such as bricklayers, welders, among others.

According to him, checking the activities of such people, some of who squat in all kinds of places within the estate, could close some of the existing security loopholes.

He added that the residents’ association he belonged to were already considering controlling the influx of people into the estate “by reintroducing the Lekki Residents’ Sticker Programme” and providing labourers working in the estate with identification badges.

“This will control and monitor new construction and reconstruction — to know the labourers to work on a site and to monitor them accordingly,” he said. “If their work extends beyond six months, the badges will have to be renewed.”

However, some other residents have called for the closure of neighbourhood nightclubs, describing them as incompatible with residential areas. They argued that the proliferation of nightclubs in and around residential neighbourhoods in the state would present a good cover for robbers at night, suggesting that such clubs be restricted to commercial avenues.

A resident, Akeem Oladeji, who expressed displeasure with the situation, said improvement on security hinged on keeping nightclubs off residential areas.

“With the nightclubs,” Oladeji said, “robbers can hide their heads and still perpetrate all the evil they want.”

In her reaction, Ngozi Braide, state police command spokesperson, denied knowledge of robbery incidents around Lekki area, saying that the police were not “informed or aware of it.” (Source: Daily Times)