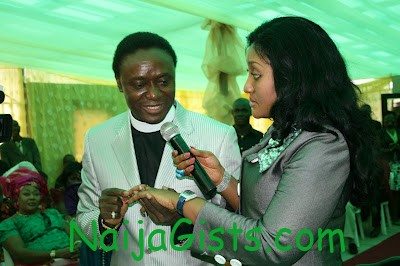 While many considered the whole divorce drama between Pastor Chris Okotie of Household of God and his wife (now ex), Stephanie Henshaw to be over, another twist has developed to the story in an interview a Pastor of Chris’ church had with City People magazine. naijagists.com

Rev. Grace Paul in the interview speak on a lot of issue and tries to provide full explanation of what transpired between the former lovers:

A blind person knows that my pastor loved his wife, Stephanie, passionately. This year before the separation, he had taken her out of the country at least three times to different places like Dubai, US and so on.

He loved her, so did the congregation but the bible says that two cannot walk together except they agree. In the establishment of the kingdom of God, the rules change because the rules are made by God and not by man. So, it didn’t have to do with what pastor wanted to do, because left to him, his love will keep him struggling and going at it but if God gives him instruction he has to follow it through.

If I get you correctly, it was Jesus instructions for Pastor Chris to part ways with Stephanie?

Let me give you a precedent. In the bible, there’s a queen called Queen Vershti of Persia. The king invited his wife and said – come woman, I want to show you off to my people and the woman had an attitude. She had pride issues. It was at that point she said to the king “Excuse me, I am making up, how can you be humiliating me by telling me to come and sit down so that people can be looking at me.”

So she refused and the people of the kingdom rose up against her, and they said the king must let her go, and that was how Esther came in. That is the principle of The Kingdom. In the two cases of my pastor’s former wives, it was an abdication of roles. One was a physical abdication, and the other was a spiritual abdication. In the matters of the Kingdom of God, when you abdicate your position, your position will be taken over, because the calling my pastor has, he is not called to work alone.

In Stephanie’s case, was it a case of spiritual or physical abdication?

Her case was spiritual abdication, but either ways it amounts to the same thing, because the scripture states clearly that if unbelieving departs, let him depart, you are not bound.

Any efforts to patch things up?

Spiritual things can not be patched up. When there are two people who are not the same kind, it is not a matter of patching up.

So is the congregation happy that the pastor is single again and is there any plans to replace Stephanie?

The congregation is not in the position to replace Stephanie. My pastor is a full grown man, and he knows what he’s doing. In the case of our pastor’s first wife, she insisted that where she wanted to do her church work was in the US. As for Stephanie, I cannot be intruding. As much as I am authorized to do what I am doing, I can’t disrespect my pastor and Stephanie. If I begin to give you some details, they would amount to disrespect. My pastor has insisted that they want to keep it private.

If you know my pastor, he is a passionate person. They had a long time relationship before they got married. My pastor is particularly careful about beautiful women because he knows that the devil desires them.

So when a beautiful woman has issues in church, he ministers to them, and because he does that, people jump to the conclusion that he sleeps with them, which is not true. Just like Queen Ure, pastor has never had an affair with her, will never have an affair with her because they are not of the same kind. Ure was pastoring her own church, until she became bored.