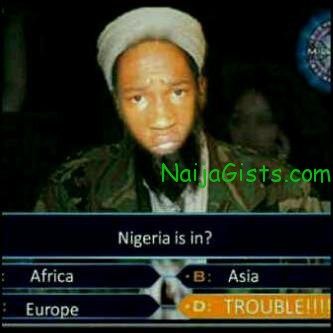 In a newly released report, we learnt South African telecoms company, MTN Nigeria defrauds Nigerians of several billions of Naira yearly through its many scam promotions and poor services. naijagists.com

The most annoying part is how MTN defrauds thousands of innocent Nigerians through its TV-quiz game show tagged “Who Wants To Be A Millionaire?”.

How MTN Defrauds Nigerians Through Who Wants To Be A Millionaire

While many innocent Nigerians believe that the company is doing a corporate social responsibility programme (CSR) by helping those they say deserve to be millionaires by bringing them on set and trying to make them play for ten million naira, a money believed by many comes out of MTN’s coffers.

But on the contrary, Nigerians themselves sponsor the show while the telecom giant carts away the profit, thus exploiting Nigerians.

MTN’s Profit From Who Wants To Be A Millionaire

This is based on the conservative estimate that at least a quarter (8,325,000) of MTN’s 33.3 million subscribers send an SMS each (costing N200) to participate in the TV game show “Who Wants to Be a Millionaire”.

With the home-play version, using the same estimate, the firm makes N39.960 billion each year. With the combined figures (excluding proceeds from other promos), MTN Nigeria earns at least N119,880,000,000 in a year.Also,the home game that the viewers always played is another means of defrauding Nigerians of another billions of naira. Unknown to the viewers, the programme watch all over the country is not a live programme but a recorded one and the unsuspecting Nigerians always rush to be part of it for hundred naira per message for a recorded programme that is on air on different stations at different hour.

Where a contestant mounts the stage, he or she plays for N10 million and in most cases they don’t win completely. So where are the remaining billions if truly it is a charity programme?

Besides, MTN appears to be a corporate entity of rippers and scammers in the area of service delivery to its teeming clients. According to its users, the telecoms company charges exorbitantly for its bad internet services. A user who goes by the name Patrick Oparaocha explained a situation where he paid for MTN’s 24-hour internet service and gets cut off for five days without refunding the cash or sending an apology for the error. Our findings revealed that the story goes on and on with many Nigerians who have also complained about its expensive call tariffs which is far higher than other networks.

Two weeks ago, the network operator switched off its network in Lagos and its environs thereby giving its subscribers unbearably low quality service, and ripping off their monies.

Though the Nigerian Communications Commission (NCC) has promised to place serious sanction on the network provider, concerned Nigerians are compelling the agency to look into the fraudulent activities of the telecom company.

Continue Reading
You may also like...
Related Topics:Billions, frauds, millionaire, mtn, nigeria, Nigerians, scams, who wants to be