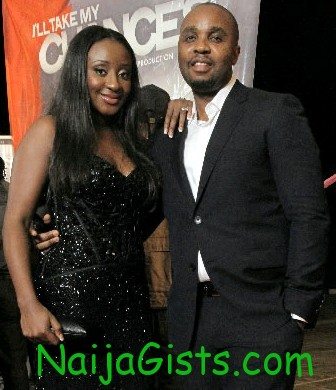 African culture surely has certain behavioural pattern and norms that is expected of married women. Some behaviour however are looked upon as as taboos especially when the women are not in company of their husbands. naijagists.com

It’s therefore surprising that more than three years after she tied the knot, Ini Edo Ehiagwina is still of the belief that she is still that explosive single lady.

Few weeks back Nollywood actress Ini Edo was caught behaving more irresponsibly than when she was still a spinster. The plump dark-skinned actress who got married to Philip Ehiagwina, a US-based Nigerian divorcee has not come to terms three years into her marriage that she’s actually married, as she has at several times be sighted very odd hours at clubs in drunken state.

Calabar-born Ini had reduced her club life to the barest minimum immediately she got married, but her recent appearance at clubs is raising suspicions that all may not be too well with her marriage.

She was sighted at Club 10, Victoria Island in Lagos on the March 28, around 1a.m. and the state she was found in was not befitting a married woman.

Ini Edo was spotted in a black mini gown with white collar as she arrives the club dead drunk; she was in such a drunken state that she could not stand upright and could only stagger to her seat.Those around could not help but comment that the Nollywood actress might have just rediscovered her appetite for booze as she would not leave until she had soaked herself in alcohol.

They were wondering aloud as to the reason she decided to plunge herself back into a habit she worked so hard to get out of initially. It is not new that Ini Edo was a club and booze freak while she was single, but in her bid to launch herself into the married class, she had put a stop to the kind of life she was known for as a spinster and the return to the lifestyle may mean the rumour that all is not well with the marriage may after all not be unfounded.

Philip her husband who is based in the United States of America, has of late not been regular in the country and this may be adding strain to the union, with Ini Edo knowing fully well her husband’s prowess with women, a reason she had fought many ladies before and after their wedding to stay off her man.

It is no secret how she was able to win the man from his first marriage to Ruth Okoro, how she had to fight a female journalist she thought was getting too close to the man before the marriage and how she warned several of her Nollywood friends to stay off her man after the marriage proper. And his continuous stay in America may have forced so many thoughts into her mind, which could be the reason she’s back to her reckless self.

Ini Edo Unable To Conceive After 3-Years Of Marriage

We learnt her inability to conceive after three years of marriage may also be mounting pressure on her relationship as it is suspected that the husband’s family has started raising eyebrows. Ini Edo and Philip tied the nuptial knots in 2009 in the United States of America after their traditional marriage in 2008.

Ini Edo’s failure to have an issue was initially said to be due to Ini Edo’s work and the husband residing abroad but three years down the line, tongues have started wagging and this may be having its own effect on the actress.

Meet Nigeria’s Smallest Person, Evelyn Ochepe
How MTN Defrauds Nigerians Through Who Wants To Be A Millionaire