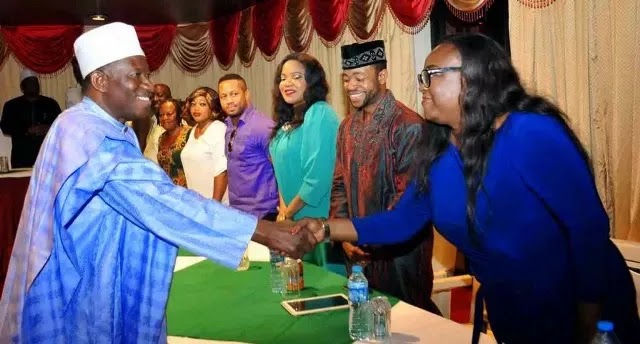 The genuine intention behind setting up this laudable scheme by former President Goodluck Jonathan has been derailed by our colleagues in Nollywood.

The scheme was meant to energise and reposition the industry in three fold through the provision of grants to applicant-stakeholders in the industry to tackle key challenges of distribution, capacity building and contents production. But alas, Dr. Okonjo-Iweala and her consultants got it all awfully wrong from the outset by putting the cart before the horse.

Now, let us historicize albeit in capsule for the purpose of clear understanding of the issue at hand. After former President Jonathan announced the N3 billion grant scheme and Dr. (Mrs) Okonjo-Iweala as its manager, she organized a couple of meetings with stakeholders in the industry on how we want the grant to be utilized.

In order of priority, we itemized the following: putting in place effective distribution system to tackle the menace of piracy, capacity building for key practitioners in the industry (writers, directors, producers, camera handlers, editors etc) and production of contents. Participants at these meetings unanimously endorsed this industry position. Sadly however, and without consulting the industry, Dr. Okonjo- Iweala went ahead to engage consultants, most of them foreigners who know next to nothing about our industry, to manage the scheme.

I personally wonder, what then is the role of the Nigerian Film Corporation (NFC)? What about the National Film and Video Censors Board (NFVCB) and the Nigerian Copyright Commission (NCC)? These are statutory federal regulatory agencies for the industry.

Is there anything these expatriate consultants know about the industry or can do about the scheme that a tripartite Project Management Committee of the NFC, NFVCB and NCC would not have been able to handle and deliver on record time at no extra fee? Who, and from what source were these Okonjo-Iweala’s consultants paid or to be paid? From the N3 billion grant, I hope not! These are some of the unanswered questions begging for answers. Back to my historical trajectory of the Project Act Nollywood. The expatriate consultants decided to reorder the order already outlined by the industry vis-à-vis the disbursement of the grant and general execution of the project. They now placed capacity building first, contents production second, and distribution third. Simply put, they now decided to put the cart before the horse, without having the courtesy of first consulting the industry.

I think this is preposterous. The industry identified ineffective distribution as its major challenge yet, as I speak, not a kobo has been disbursed to any distributor or aspiring distributor in the industry from the N3 billion Project Act Nollywood grant. Why should you waste money on production of contents when there is no efficient, auditable and accountable distribution system in place? Are you not simply providing food for the pirates?

The distribution challenge should have first been tackled, followed by capacity building and then contents production coming last in the tripod disbursement strategy of the grant. Another development that was extremely nauseating and unbearably choking to me is the fact that handlers of the Project Act Nollywood dangled it as a carrot to get stakeholders in the industry to become clappers and dancers for former President Jonathan at his various political campaign rallies during his failed 2nd term project. Virtually all the beneficiaries of the capacity building and contents production legs of the tripod grant fall into this category.

I dare to be contradicted on this score. However, let me sound this as an advice and indeed a note of warning to all the ex President Jonathan clappers and dancers in the industry who benefitted from the contents production grant to, in their own interest go to location and use the grant for what it is meant for. Most of them collected the grant and went straight into new marriages, purchasing new cars, renting new apartments, servicing old debts etc. I must make it manifestly clear to them that the grant is taxpayers money meant for a specific purpose.

It is meant to tackle some of the challenges of the industry, create employment and ultimately energize the industry. This has not happened thus far. For me, collecting the grant and not using it for the purpose it was meant for amounts to economic and financial crime. It also amounts to corruption. It is economic sabotage. Some of us will drop this issue at the doorsteps of the EFCC and ICPC in no distant future. Thank God a new Sheriff is in town at the federal level. This Sheriff has very short plug for corruption, economic and financial crimes. We can no longer allow people to give the industry a bad name by collecting money meant to be used for specific purposes in the industry but end up diverting it into other things.

Each of the beneficiaries collected between N5 million to N10 million for contents production. They must show proof of such contents they have produced or be ready to face the law. Some of the beneficiaries are the same characters who destroyed the image of the industry before Eco bank with a failed N100 million project. This is no longer acceptable. For me, I think President Muhammadu Buhari should first look into the books of the Project Act Nollywood before deciding whether to continue with it or not. Let the project managers and consultants first account fully for the N3 billion in their care vis-à-vis the journey so far and how it has impacted on the industry.

Thereafter, whatever is left of the scheme should be handed over to the NFC, NFVCS and NCC to manage in consultation with the industry. As far as I am concerned, President Buhari should strengthen the NCC, Custom and Police to fight piracy headlong. There is no need to set up any committee to achieve this. No new committee was set up before the late Prof Dora Akunyuli reformed NAFDAC and sent fake drug criminals packing.

The law must be reformed to hang death sentence or life imprisonment without option of fine on pirates and other intellectual property robbers. This offence must be criminalized. This is a sure way to go. Romanizing the issue will take us nowhere. Finally, what the industry need from President Buhari at the moment is not grants or loans. This is least in our long list of challenges. The President should create enabling environment for us.