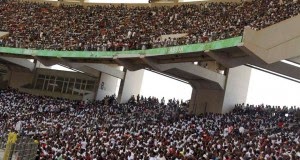 ‘The greatest danger to a civilised nation is a man who has no stake in it, and nothing to lose by rejecting all that civilisation stands for’- Henry Ford

One of the indicators of war time I have come to accept as a fact is that, ‘in peace time, children bury their parents. In war time, parents bury their children’. If you are still doubting that we are in war time, ask the parents of the students killed in Buni –Yadi, Yobe State; ask the mothers and fathers of those killed across the Country at Stadia, where they have innocently gone to struggle for survival in a country that thrives on ‘survival of rogues’! They have the most harrowing duty of burying their children. This has also become ubiquitous tragic duty of many Nigerians in the recent time.

The suspension of common sense by the Nigeria Immigration Service has once again driven home breathtaking severity of unemployment in Nigeria and the kinetic impotence of the Nigerian Government to secure, protect and preserve its people, especially the youth. After ripping off hundreds of thousands of unemployed Nigerian youth of one thousand Naira each in a nauseating allusion to service failure by a government agency via a deception of a job opening, it has now vicariously killed at least twenty(20) of them in a stampede caused by indiscretion.

Just in this last one week, close to one thousand Nigerians and residents lost their lives; 20 vicariously killed by the Nigeria Immigration Service at the Stadia across the Country, 100 Killed in Southern Kaduna, 106 killed in Katsina, over 200 Boko Haram members allegedly killed by the soldiers. Blood continue to flow in the Benue/Nassarawa Axis, it is worse in Borno, Yobe and Adamawa States. Yet, this bunch of irredeemably failed leaders does not know that Nigeria is at war. Nigeria is at war with her youth. Nigeria is at war with her women and even with her men, who hope to get a decent burial from the children they are now succeeding. Instead of sitting straightly to face the questions that drove us into society, they are theorizing and politicking. To them, excuse has become tool for governance; imaginary political opponents are sacrificial lambs for gross incompetence.

If you compare Nigeria with UK, they will tell you that it has taken UK centuries to develop. If with India, they will tell you that it is because of population advantage. The quantum of electricity we need to live like human beings in Nigeria is not up to what Calcuta in India, a fragment will need. Imagine what a twenty thousand megawatts of electricity could have done to the lives of over five hundred thousand youth that gather at the ‘ open grave’ prepared for them by the Nigeria Immigration Service in term of self – employment?

I can not blame the youth that died while seeking to live; in a society where nothing is left again to tincture the conscience of ‘rulers’. Those who are no longer moved by spilling of human blood can never be moved by the sight of morbid unemployment that has been afflicting our youth. Oil Spillage in Ogoni or UNEP Report did and does not move them. Over 40,000 Nigerian refugees in Niger and displacement of over 500,000 Nigerians are to them mere figures. Those who declared that corruption is not a prime problem in Nigeria will never understand your problem with the alleged missing of $20 Million in NNPC. They will never see the nexus between deprivation and disenchantments. The connection between oppression and resistance is beyond their mental comprehension. The relationship between humongous poverty in the midst of plenty and violence is far beyond a man who keeps on beating his chest from Davos to Washington that the policy of his government has produced the richest man in Africa, not minding critical concern of the other 500,000 unemployed citizens struggling to fill 1000 job vacancies.

A President that continues to say that Nigeria will not disintegrate without working toward that is living in ‘Crusoe Island’ or ‘Disney Land’, Nigeria has not physically broken into pieces; mentally. She has! Ethnicity, religiosity and nepotism have re-defined loyalty. Ethnicity and nepotism have shrunk spaces of opportunity and by extension, stifle development. The fratricidal badges of Hausa, Igbo, Fulani, Ijaw, Yoruba, Itsekiri among others are the burden we have unleashed on ourselves through political greed, economic gluttony and power profiteering. We have no more space for humanity! These are yokes we can not break until we return to the cubicle of our conscience to locate the purposes of leadership and citizenship. A ruler who keeps on moving from one church to the other like Pharisee without learning how Jesus Christ chased Marauders (thieves or robbers) out of the Church, telling them that ‘ my father’s house shall be called the House of Prayer, not the Den of Robbers’ can never build a just state.

The race into society from Thomas Hobbes’ State of Nature, where life was ‘short, brutish and nasty’ envisaged that society/state must take up some responsibilities if life must become safe, secure and pleasant. Hobbes anchored his postulation on the Social Contract, the thread that ties state to duty and the open vista of security to people who have necessarily sundered their rights in exchange for expected welfare and security. Hence, having conceded the limitless ‘rights’ or might in the state of nature to the state, the state can no longer discharge itself of this onerous responsibility on which the faith of people in it is built. The Social Contract shifts society away from the Covenant of Blood! It protects people against bloodletting and ensures that those who attempt it gets due sanctions. It replaced ‘Might’ with ‘Right’, persecution with protection and cruelty with humanity! Whether through state carelessness or negligence when a group or sect assumes and asserts the right to kill, citizens automatically lose the privilege to live! I say, ‘privilege to live, not right to live.’ The ‘right’ is already gone with the wind that ends with a state’s capacity for protection.

A country where tomorrow has become a nightmare has lost the capacity to regenerate herself. Until the youth, who are the future of that country stop singing God’s song in strange land; hope is far. The youth must take active interest in the affairs of Nigeria if we must end ‘Boko Haram’ and ‘State Haram’. If the impunity that has taken liberty away from Nigerians must be defeated, the youth must be the frontline soldiers. I sympathise with the killed, the dead and the wounded. I will never pity the living because like George Sutherland, ‘the saddest epitaph which can be carved in memory of a vanished liberty is that it was lost because its possessors failed to stretch forth a saving hand while yet there was time’! Arise, o ‘compatriots, Nigeria call, obey!

14 thoughts on “How Nigeria Immigration Service, NIS Killed 20 Job Applicants In A Day”