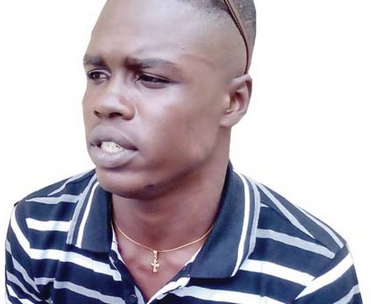 August 8, 2015 – How I Escaped From Ritual Killers Who Used Bus Driver In Ajegunle Lagos To Kidnap Me

It was testimony time at St Paul’s Catholic Church, Ebute –Metta, Lagos and Onyeyiri Victor Umeoyinagwu, 25, was one of the testifiers who was eager to tell his story. His testimony was that God saved him from the hands of death. In church, he simply said that he was kidnapped by suspected ritualists and mysteriously escaped before being butchered like others who were abducted alongside with him.

After the church service, Saturday Sun re­porter, who was at the church, had a chat with Onyeyiri and he recounted his encounter.

“I am an apprentice attached to Mr. Nonso Umeh, a spare parts dealer. Part of my duty is to buy goods for the shop. On Wednesday, July 8, 2015, I was sent by my boss to buy goods at Apapa spare parts market. On my way, I boarded a bus from Ebute- Metta and alighted at Ajegungle area of Lagos State. Initially, I wanted to board an okada (commercial motorcycle) but realised that I do not have a lower naira de­nomination. I knew no okada man will carry me if they knew that I will be using N1000 note to make payment. I boarded another bus heading to Apapa.”

According to him, the bus he boarded had few passengers with five males. The presence of two young boys of his age made him to feel comfortable in the bus. He relaxed and the bus zoomed off. Minutes later, someone sitting behind him covered his nose with a cloth attempting to choke him. His words: “The next thing I knew was that my face was covered with clothes. I could not shout. The piece of cloth was tight and had a bad odour; the scent was that of a chemical. I guess that I became unconscious as I can’t recall what happened next till we got to a compound.” Describing the com­pound, he said the house was yet to be painted with high fence and of equal gate height. There were no houses close to it and there were fleets of cars in the compound. “I did not regain conscious­ness until I was dropped off in a very big compound. The bus that conveyed us to the place drove off, leaving us with five scary men. The boys were no longer there. There were a lot of cars in the com­pound. One of the men started to point at us, saying ‘this will be good for stew, this one for pepper soup’ we were scared. We started to beg them. I even offered them the money I was supposed to use to buy parts.

“They responded that they will take my money and other things they need from me, that it was of no use to beg. As I was begging, one of them asked for my phone, I gave it to him; he then asked me series of questions, I answered all. I told him that I am only an apprentice. He asked for my boss’ name and I told him. I gave him the phone and he was with it for a while. Later, he dropped the phone for me. It was then that I called my boss,” he stated. While in captivity, Onyeyiri knew that the only thing that could save him was prayer. When he had an opportunity to communicate with his master, the only request he made was prayer, “Please, pray for me, I was in captivity!” According to him, in the night of the same day (Wednesday), they took one of the other two boys, captured, out­side. The next thing they heard was the sound of bone breaking, clangs of axe butchering meat. The boy never returned. The next day (Thursday), they took the other boy, the sound was same and he too never returned.

“On Friday night was my turn to be butch­ered; one of them took me by my hands. One was in front and the other at my back. The one in the front suddenly turned and rained curses on the one at the back for slapping him. He said the one at the back slapped him. The one at the back didn’t like his counterpart’s utterances, so, he shouted back at him, telling him he did not slap him. As they were arguing, it led into a fight. The third one holding me left me to break up the fight. Miraculously, I passed among them. I found my way outside the house, but still in the compound. “It was night, I could not see much, when I got to the gate, it was locked with chains and a gigantic padlock. It scared me and I lost hope. Nevertheless, a voice told me to check the padlock and see if it was locked. I touched the padlock; it was not locked. The gigantic padlock fell apart, I opened it and ran out of the compound,” he narrated. After the escape, Onyeyiri said he was tired and could not run, adding that there was a thick forest in front of the unpainted house, and that he preferred to run into the forest than waiting for his captors to catch up with him. When he could not find strength again, he fell. It was then that his deceased father appeared to him. “Every other thing that hap­pened to me was in a trance. I felt a hand tapping me on the shoulder, as I raised my head to look, I saw my late father. We ran together, as we did, I was hearing the sound of heavy foots after us. It made me run faster and stronger. “At the end, I found myself at Oyinbo bus stop. I then trekked home. They said when I got home the person I was asking after was my father.

However, I know my father is deceased,” he stated. Among those felicitating with Onyeyiri was his master, Mr. Nonso who seems to be the happiest. When Onyeyiri was missing, he had made efforts to contact all the prayer groups he knows, both in Lagos and outside the state. Despite the assurance given to him by police that they would do all they could to search for his apprentice, he also asked for help from friends and counterparts.

He said when they got home on that day, after asking after eve­ryone, he found out that Onyeyiri was missing. “I tried to call him, and the call didn’t go through. I sent one of my other boys to check him in the shop. Before the other boy left, I had called Onyeyiri’s friend to check if he was hanging out with them or in the market. They searched the whole market for him, yet they could not find him,” he said. Mr. Nonso said that a message was delivered on his phone, which must have been at the time one of Onyeyiri’s captors was questioning him and collected his phone. “Around 9:57pm, a message came into my phone from his number.

The message read; ’he said you are his boss don’t waste your time looking for him, you will not set your eyes on him again, this boy is important to us, he fell into our trap’. At that point, I didn’t know anything else to do other than to go to police and commit him into God’s hand. “We went to Denton police station to lodge a complainant, they said we should come back after 24 hours, before declaring the boy missing. We also told many pastors. And they had a special prayer session for him,” he said.

After the message, around some minutes past 10 o’clock, he said Onyeyiri number called him, telling him that he does not know where he was and we should pray for him. “It was after I had at­tended evening mass that he returned, we massaged him; he was thirsty and drank a lot of water. Thereafter he caught some breath and narrated his ordeal to us. What was worrisome was when he was asking after his father, we did not do anything unique, we just prayed and God answered our prayer”, he stated.