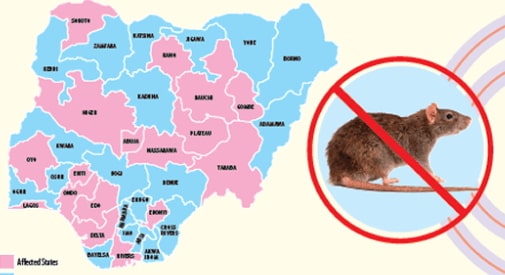 How To Stop The Spread Of Lassa Fever In Nigeria

If serious health concern lately, has been the ravaging scourge and spread of Lassa fever in Nigeria. Lassa fever has been a major health challenge in West Africa and its spread has created panic even as concerned private and public health institutions battle hard to curtail it every year when it raises its ugly head.

As at first week in February, the death toll from Lassa fever outbreak in Nigeria had risen to 47 as disclosed by Nigeria Centre for Disease Control in its weekly situation update for week five (January 27 to February 2). The spread of this killer-disease may not be easily curbed since there is no known vaccine for the prevention of the disease for now. However, it could be curtailed and managed when informed decisions are taken by every citizen.

What makes Lassa fever challenging and a bit difficult to diagnose and treat is the fact that it initially assumes and mimics the symptoms of malaria. This in turn leads to delays in treatment because only few laboratories in Nigeria can diagnose Lassa fever virus. Lack of treatment commencement worsens the condition of an infected person as early diagnosis and treatment of the disease are key to any survival chance.

It is also important to bring to the attention of Nigerians that we should be weary of smoked meat slices (Suya), bean cake (popularly called ‘akara’ in local parlance), roasted corn and other food items or snacks that are usually sold by wrapping them in old newspapers or other paper materials where rodents might have excreted on them. That paper-wrapped food item may not be washed or rinsed before consuming so it becomes unhealthy to eat. It is therefore not hygienic to keep food items in used papers. These papers may not, by mere visual inspection, reveal rodents’ urine or excreta, so difficulty may arise in discerning which ones are contaminated or not. One never can tell if these papers have come in contact with excreta from rats. When an individual then consumes food items wrapped in these contaminated papers, such a one may be at high risk of contracting Lassa fever. It is therefore advisable to play safe by taking your container to receive the food items at the point of sales or requesting them to be sold in a safe and healthy wrapper.

Not too long ago, a Director of Public Health, Enugu State, Dr Boniface Okolo, warned Nigerians against the consumption of cassava flakes (garri) to avoid contacting Lassa fever. Boniface said the rats that caused the disease were mostly in contact with the most popular Nigerian staple food, garri. When garri is soaked in ordinary water and consumed, one is exposed to the risk of contracting Lassa fever. But if the water is boiled to make ‘eba’, it could go a long way to kill the bacteria caused by pest or rodents in garri.

Last month, Nigerians woke to receive a shocking alert issued by the National Agency for Food and Drug Administration and Control, NAFDAC, on the use of paracetamol as tenderizers to cook meat by some unscrupulous food vendors. Paracetamol is added to soften the meat thereby saving cost of cooking for a longer time. Some households and restaurants have adopted this fast but deadly means of cooking meats meant for consumption. No wonder some meats are so soft and tender that they can be split into halves with ordinary plastic spoons or bare hands. It is not to say that there are no other healthy and legitimate ways of tenderizing meats but there are other harmful, illegal and unhealthy ways of boiling meats as revealed in a recent warning issued by NAFDAC.

The public alert from NAFDAC reads: “The members of the public, especially restaurant operators are cautioned to desist from the dangerous and unapproved use of paracetamol tablets to soften meat used in food preparation, as such illegal practice makes food to become toxic, unwholesome and unfit for human consumption.” The statement further explains the effects and health implications of consuming paracetamol-treated meats. The statement adds: “when used to cook, paracetamol is broken down (or hydrolyzed) into a toxic substance. This substance untimely damages the liver and some other organs in the body. Thus, the consumption of toxic and unwholesome food illegally prepared using paracetamol tablets may result in serious health consequences, including liver damage, kidney failure and untimely death.”

As alternatives to paracetamol tablets, NAFDAC suggested other established and safe methods of tenderizing meat. They include the following: Cooking with a pressure cooker; marinating (soaking) with vinegar, citrus juices or wine before cooking; marinating with enzymes (pineapple, pawpaw, kiwi, ginger and Asian pear contain enzymes which can soften the meat); slow-cooking the meat or using commercial meat tenderizers in moderation which are sold in powder or liquid form.

It becomes scary and worrisome to know that some food vendors deliberately indulge in toxic processing practices. It was recently revealed by some government officials in Osun State that some food vendors in the state use bleach to process cassava used for garri. This practice is not only unhealthy it is heartless and barbaric too. It therefore becomes imperative for NAFDAC, the food safety agency in the country, to arrest, prosecute and make public culprits who put consumers in harm’s way through such deadly practice.

As at the time of writing, another plague, coronavirus has claimed more lives than SARS did in 2002/2003 worldwide. Although no reported case of Coronavirus yet in Nigeria, Nigerians must, in order to protect their health and prevent this disease outbreak, begin to practise protective measures against the deadly coronavirus presently tearing China apart. One of such measures is washing of hands with soap and water frequently. Also avoid touching your mouth, nose or eyes with unclean hands. Some health experts have also warned against consumption of raw or undercooked animal products.

We should deploy the best practice of food storage to prevent contracting and spreading of diseases that could be avoided by simple hygiene practice at home. Air-tight containers must be used to store food items, especially grains/cereals and powdery food items. Fruits and raw vegetables should be thoroughly and properly washed before consuming.

Above all, diseases of any kind can be reduced if not kept at bay if we adopt regular handwashing practice to prevent easy spread of diseases.

Our preparedness for and response to disease outbreaks, especially Lassa fever which ravages Africa’s most populous country yearly, would go a long way in reducing deaths that may arise from the spread of the disease.

Furthermore, to nip the spread of Lassa fever and other plagues in the bud, there should be public awareness and continuous sensitization of the general public on various personal preventive measures to curtail diseases indoors or outdoors.

Continue Reading
You may also like...
Related Topics:how to end lassa fever, how to stop the spread of lassa fever