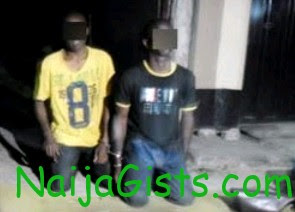 After a raid on a building believed to be occupied by ritualists, several human parts like fresh head, hands, limbs, decomposing head, female breasts were also discovered .

After a tip-off from the neighbors, Police storms the House no 6, B Close, Third Avenue Festac on Thursday at 12 noon.

After a search of the entire building the shocking discoveries were made inside a bathtub and a room used as a shrine.

2 suspected ritualists identified as Omotola and Toye Ajayi who were some of the occupants of the building were arrested.

One of the brother Omotayo Ajayi said the dismembered body found inside the bathtub was that of his younger brother who he said has been declared missing for some days but denied having any knowledge of who may have killed and dumped him inside the bathtub.

“I stay in that building but I don’t bath inside the bathroom because the bathtub is bad. The body found in the bathtub could be that of my brother. He was missing and I have not seen him for quite a long time”, Omotola said

God have mercy! This issue of ritualism is really going out of hands.