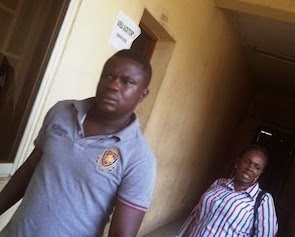 September 1st, 2014 – Husband Who Send Hired Killers To Murder Wife In Lagos After She Dumped Her Arrested & Jailed

A man identified as Abiodun Atinuke has been charged and sent to jail for planning to kill his ex-wife few months after their marriage crashed. 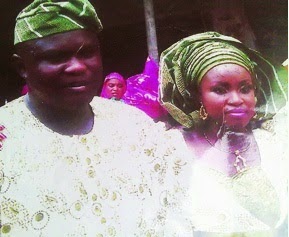 The couple on their wedding day

34-year-old Abiodun allegedly hired a 3-man hired killer gang and paid them an undisclosed amount of money to assassinate his ex-wife, Eniola who dumped him 6 months after their wedding.

Abiodun allegedly sent the hired killers to 15 Ogunmokun street in Mushin area of Lagos to murder Eniola but luckily she escaped and reported the matter to Olosan Police station.

Abiodun was promptly arrested but the hired assassins escaped.

Abiodun told the police that trouble started after they got married and Eniola started behaving strangely and was coming home late. He said he confirmed his suspicion when he caught his wife with her lover. The suspect said that when he confronted Eniola, instead of showing remorse, she packed out of their matrimonial home and moved into her lover’s house. Atinuke was charged before the court for conspiracy and conduct likely to breach public peace.

The suspect was remanded in Prison custody because he couldn’t meet his bail condition. The matter was adjourned till the September 2014.

See evil man, he was able to pay hired killers but didn’t have money to bail himself.