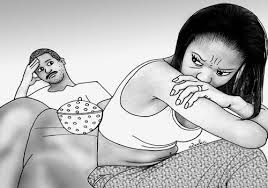 A mechanic, Sikiru Alabi, has begged the Mapo Customary Court, Ibadan, to dissolve his seven-year-old marriage to his wife, Basira, after he caught her having sex with another man on their matrimonial bed.

Alabi told the court that, Basira turned to prostitution and always rained curses on him.

He said: “I have often found condoms in her possession and she had never given me satisfactory explanation on how she got them.

Nemesis caught up with her recently when I met a man on her; they were deeply engaged in sexual intercourse right in my house.

I was mad, but Basira quickly pleaded with me and promised not to go back into the act again. Though, I forgave her, but she still got involved in adultery.

As if these are not enough, Basira takes to raining curses at any slightest misunderstanding in the family.” Basira, a hairdresser, accepted the divorce and equally did not deny the allegations leveled against her.

She however requested the court to allow her have custody of their child. She said: “It’s true that there is no more love between Alabi and I.’’

The president of the court, Mr. Ademola Odunade, held that any spouse who cheated on his/ her partner was indirectly committing murder, therefore, not fit to co-habit.

Odunade said: “It is in view of the circumstances surrounding the issue at hand that the court puts an end to the relationship between Alabi and Basira.

Alabi shall take custody of the five and a half years old child produced by the union, while Basira will be free to see the child in the court anytime she desires.’’