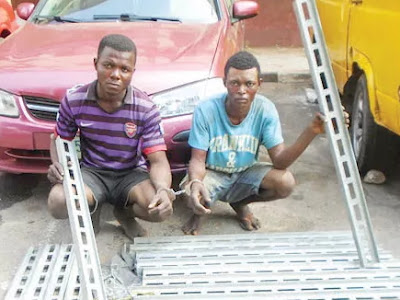 23-year-old John Omeoha and 23-year-old Godwin Nwankwo were nabbed while bringing out 17 bars for reinforcement mean to firm up the bridge from a manhole.

The suspect told the police they were desperately hungry and looking for means to get fast money.

One of the suspects, Godwin Nwankwo who came from Enugu told the police his mission was to steal the railings, sell it to raise enough money to return to Enugu.

“This year, I have entered the hole four times.

From the money I made from those sales, I have saved N5,000 in my bank account to assist me to travel out of Lagos. Yesterday, I went there again. I invited my friend, Omeoha. We stole 17 bars which we planned to sell to scavengers in order to raise funds.

Unfortunately, just as we were bringing out the metal from the manhole, RRS operatives sighted us and arrested us. My plan was to raise money to enable me relocate back to Enugu, where I repair handsets before coming to Lagos.

I want to leave Lagos because my life has been meaningless here. “I broke my waist while working with a gas pipeline laying company in Lagos. That was where my problem started. I spent two months in hospital. When I was discharged, I was advised not to do hard work. So, the easy way out for me is to scavenge for a living. That is why I need to move out of Lagos.