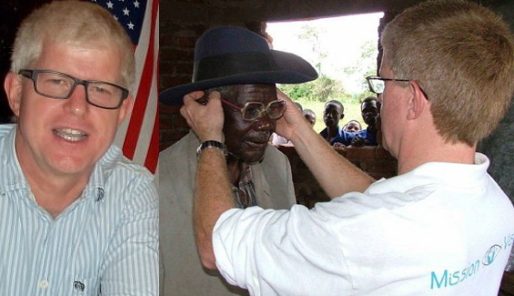 Nov 10, 2017 – Ian Squire Murder: The Pointless Killing Of British Citizen Who Came To Nigeria To Make Life Better For Us

The news on the social and regular media in the week was on the killing of British national, the ophthalmologist, Ian Squire in the Niger Delta. The cold-blooded murder is one of the most disturbing incidences to come out of the delta creeks in recent time, apart from the ongoing bloodletting on the Plateau that seems to have defied solution.

Square’s killing is an act of violence that diminishes us and which should be roundly condemned by any sane human being. It was a pointless and needless murder, but such pointless killings have always been the hallmark of such acts coming from the Niger Delta.

For those who may not know Squire, he was an optician from Surrey, England, who established the Christian Charity Mission for Vision, which came into being in 2003. The task of the mission was to give vision to Africans in the remotest part of the continent. He decided to carry out what I will describe as his missionary work, to the Creeks of the Niger Delta and specifically to the little known Ekameta village in Delta state.

To make his job easier, he invented a portable solar-powered frame and lens-cutting machine which enabled him to cut prescription glasses for those living in those remote locations. He was in the village with three other charity workers to offer cataract operations and eye check up for the locals in the clinic he had set up.

But on October 13, he alongside his companions, were kidnapped. After a lot of negotiations, the three charity workers kidnapped with him were released. The criminals held on to Squire or so it seems. The news from the creek thereafter was that he had been murdered. It was a shock. Why would someone on humanitarian effort, who had come to give succor, vision to those who would have become blind, be visited with that brutal fate. Were his kidnappers so unfeeling, although no one understands what goes on in a criminal’s mind, that they had to kill him? It is as sure as daylight that his murderers would have relatives- father, mother, sisters or brothers as beneficiaries of Squire’s humanitarian effort. But that was not a consideration for them. It would have been interesting to know what transpired in the creek leading to Square’s death. Was he killed or he succumbed to an illness due to his incarceration?

Even if it was a natural death in the hands of his kidnappers, their action stands condemned. Why was Squire not among the freed three? He is such a big fish. Why was he not the first to be freed by his captors? Did he willingly decided to stay behind while negotiation was still ongoing, preferring to put himself on the line while others were freed or would it be that his kidnappers held on to him, refusing to free him like the others?

In all these, his abductors have not done well. Their action has taken the community down a few notches. Africans are known for their hospitality to strangers and most communities where strangers reside make it a point of duty to offer protection to those strangers in their midst. The kidnappers did not consider this very important part of our tradition. There are repercussions for this act. Expatriates on missionary or humanitarian effort would not want to venture so far into such a remote area to offer humanitarian services. Nigeria has more to lose as a result.

Indeed, the British government through the Foreign and Commonwealth Office (FCO) had issued travel advisory to her citizens as far back as July 29, this year and this was further updated and made relevant after the death of Squire.

The advisory listed states considered dangerous to visit by Britons due to incidence of violence and kidnap that occur in those places. The states are Borno, Yobe, Adamawa, and Gombe including the riverine areas of Delta, Bayelsa, Rivers, Akwa Ibom and Cross River States.

We have ourselves to blame for this.

It is thus gratifying when the news filtered in that the criminals have been apprehended. They should be diligently prosecuted and punished for their action.

In order to pass across the message that expatriates are visitors in our midst and should not be harmed.

This is one of the ways the image of the country could be salvaged; it is also the only way the family of Squire would have closure- knowing that justice had been done.

[About the author: Bolaji Tunji, bolajitunji@gmail.com,

The Pitiful Ordeal Of Africans Migrating To Italy & Europe With Help Of Migrants Smuggling Gangs
Ritualists Now Have Branches In Most Naija Cities.. How Humanity Is Being Sacrificed On Altar Of Greed