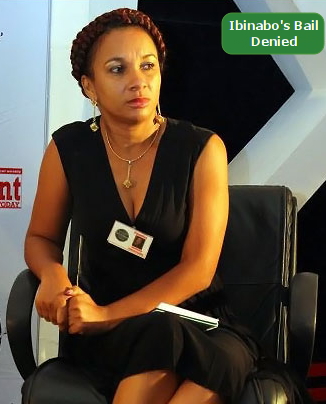 The bail application of Nollywood actress Ibinabo Fiberesima has been denied by the Appeal Court.

Today the Appeal Court of Lagos declared her bail application incompetent for refusing to attach copies of the judgment delivered by the court which affirmed the five-year jail sentence slammed on her by a Lagos High Court.

The three man-panel of Judges, Samuel Oseji, Tijani Abubakar and Justice U. I. Ndukwe-Anyanwu observed that the appellant failed to attach to her application copies of

When the matter was mentioned Ibinabo’s counsel Nnaemeka Amaechina told the court about the bail application dated 14 March, 2016 filed before the appellate court and that a copy had been served on the Lagos State Government (respondent).

However, the application could not be heard as the court observed that the appellant failed to attach copies of the judgement of the court as exhibit thereby rendering the whole application incompetent.

Justice U.I. Ndukwe-Anyanwu (presiding) said the only option left was to strike out the application or adjourn it till further date for hearing.

Consequently, Amaechina asked for an adjournment to enable him do the needful.
Thereafter, the court adjourned the matter till April 7 for hearing.

Meanwhile, Ibinabo has asked the Supreme Court to set aside the judgement of the lower court affirmed by the Appeal Court.

Continue Reading
You may also like...
Related Topics:application, fiberesima, ibinabo