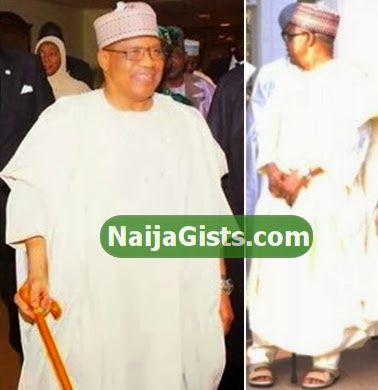 Around 1pm today, ex-President Babangida’s son, Mohammed was seen picking up his children at the EL-AMIN international school.

He avoided the press and sneaked into a waiting vehicle in a hurry.

His move came hours after a viral report claimed that the former Military President has died in Germany.

A close source to the former President who spoke with The Sun this afternoon said the General is still alive in Germany.

The source said IBB is expected to return to Nigeria today or tomorrow.

“We are expecting him in Nigeria any moment from today because he has been in Germany for treatment.” – said the source

An unconfirmed source said IBB is battling a terminal illness suspected to be cancer that requires close monitoring.

He goes to Germany for checkup every 3 months.

Nigerian Nurse Forced To Carry Out 320 Abortions For Girls Trafficked To Libya Dies Of Spiritual Attack
Being Single Is Not A Death Sentence, Ladies Stop Running After Men