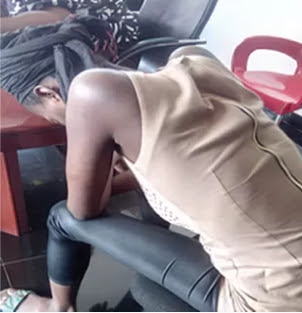 June 4, 2016 – Nigerian Nurse Forced To Carry Out 320 Abortions For Girls Trafficked To Libya Dies Of Spiritual Attack After Confession

A 26-year-old orphaned Nurse lured to Libya under the guise of working as a nurse has died weeks after she was rescued from human traffickers.

Abigail (pictured above) was among the 500 Nigerian girls trafficked to Libya by a Nigerian couple Alhaji Muritala Sanni and Alhaja Lateefat Sanni.

After her confession, the couple who led the syndicate in Nigeria were arrested and charged to court.

Abigail told NAPTIP ( National Agency for the Prohibition of Trafficking in Persons) she was forced to carry out 320 abortions for the trafficked girls.

Abigail, who had spent three years in Libya, said she was glad to be home.

She reportedly died of spiritual attack few weeks after her confession.