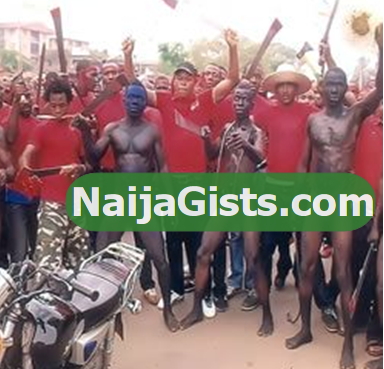 Some angry youths, suspected cultists caused pandemonium in Anambra state on Tuesday when they attacked the Christians in their community over a disagreement on a cultural masquerade night which the Christians opposed.

We learnt some cultists attacked several places of worship and injured over 50 Christians.

According to Daily Sun, the attackers also went on rampage, looting and burning churches in the community.

Here are few churches affected in the area;

A 2-year-old baby was among the victims.

We learnt the trouble started over a disagreement between Christians and the Idol worshippers on the cultural night masquerade, a local fetish cult opposed by Christians in the area.

Mr Sunday Aliuba, one of the victim, said they were in the church when the miscreants stormed their church, armed with guns and machetes. He said they swooped on the congregation and inflicted machete wounds on them, causing stampede as people struggled to escape from the church.

“How it happened was that Oba-Ofemili and the Christians had an agreement that the night masquerades will not start by 9pm, and we were having our programmes according to the rules. But on Monday night, I was at the crusade when we heard that the pagans will burn down all the churches. Around 11pm, they started shooting sporadically into the air, causing everybody to shiver. Around 1.00am on Tuesday, they stormed the church, and razed down the parish priest’s house and pursued everybody in the church. We hid under the staircase and under the pews.

“In self-defence, we pounced on some of them. As it got hotter, my colleagues ran away. I also ran but they pursued me and shot me in the legs, shattering my ankles and bones. They also inflicted machete wounds on me. The blood that came out of my body can fill two buckets. It is only God that is sustaining my life till now.”

A priest of Saint Paul’s Catholic Church, whose parish was destroyed, Rev Pat Odinanwa said all effort to make peace with the idol worshippers proved abortive as the unbelievers have pathological hatred for Christians in Oba Ofemmili community.

Rev. Pat said there were agreements reached between the church and the community, but the pagans sought all avenues to stop Christians from worshipping God in the community.

The Christians at Oba Ofemmili community are now living in fear.