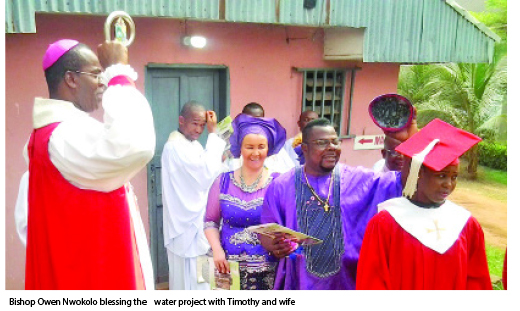 Timothy, Chief Executive Officer, Ebelechukwu Group of Schools and Skill Acquisition Centre, has already acquired the sobriquet of Mmirinaezoroha (water that falls for the public), an unofficial title on the lips of many going by the number of water projects he single-handedly built and provided free for many communities in Anambra and Imo states.

It was in the same tradition that he extended the gesture to the Anglican Cathedral, Onitsha, as part of activities marking his 25 years of marriage.

While commissioning the project, the Bishop on the Niger, Rt. Rev. Owen Nwokolo, shortly before cutting the tape thanked the couple for the provision of the borehole, thanking all who have been helping to make the society better.

Earlier in a sermon during the wedding anniversary service, the Bishop described jubilee as a memorable thing, which any celebrant looks forward to with enthusiasm.

He thanked God that the marriage of the Igbo man from Nigeria and the wife from Germany had produced positive testimonies as well as helped to cement lasting bonds between the two countries.

“Celebrating 25 years of marriage is something to be desired and today we are laying emphasis on love. Love is the centre of marriage while marriage is a demonstration of Christianity.If you are married happily; it is a testament that you are a good Christian because a Christian marriage depicts the imagery of God’s relationship with man.

The bishop also counseled the couple on the essence of sacrifice, pointing out that God is expecting people to love from their hearts and not based on what they would gain.

He said love from the biblical point of view was patient, kind, not arrogant or seeking its own while true love is everlasting.

Mr. Chukwukelu speaking during the reception shortly before proposing a toast said his marriage to Gabriella had translated to marriage between two cultures.

He said that despite the challenges of coping between the Igbo culture and the German culture, the union had many reasons to be grateful to God.

He said the mercy of God going by his name, Ebelechukwu, had taken them far.

He showered praises on his wife for the liberty and freedom, which their marriage exuded, noting that the trust his wife bestowed on him would not be betrayed.

One of the twin daughters, Dr. Janet Ngozi Chukwukelu, who surprised the audience when she spoke in the Igbo language, thanked the guests for coming to share in their parents’ silver jubilee marriage celebration.

She said it was only true love in its pure sense that could have sustained their parents in marriage for the past 25 years and still waxing strong.

She coined an acronym for LOVE: Leadership, Overcoming, Vision and Endurance, pointing out that these are the virtues that have manifested in their parents’ marriage.

The first son, David, who made a presentation on leadership said that effective leadership began from the family.

According to him, effective leadership guides the family in hard times and challenges, describing their parents as those who piloted the affairs of the family and groomed them to take up the future with focus.

The second twin, Vanessa Ifeoma Chukwukelu, a legal practitioner, in her own presentation on overcoming, said that the marriage of her parents had proved to all that true love can overcome all challenges.

She said that when her father married her mother, some were skeptical and expressed reservations, whether their mother could adapt to the African way of life, cooking, washing and other domestic chores while others were also worrying whether she could cope with marrying an African and Nigerian but her parents have defied all odds to keep waxing stronger.

She said that vision was a core principle of the Ebelechukwu family and which had made it possible for them to plan ahead for the future, saying that today, she is practising Law in London while her parents stay back in Germany and also had the focus to establish various schools and skill acquisition centres in Nigeria, particularly in Igbo land where many people have benefitted from their efforts.

The last son, Chinedu, while presenting the last letter in the LOVE acronym, entitled: Eternity, said they couldn’t be less grateful to God for their parents, who made them realise that there is eternity and have always guided them on the path of seeking the face of God.

Recounting how the whole journey started 25 years ago to Oriental News, Timothy Ebelechukwu said it was a chance encounter with Gabriella in a supermarket in Germany that changed the whole story.

He said that after the encounter, he was propelled by some other innate abilities to take the discussion further.

Describing his wife as the best gift God has ever given to him in life, he said God planned a wife for him in the person of Gabriella and he is happy he married her without minding whether she is white or black.

Timothy also has a message for some Igbo boys who take delight in toying with the hearts of European women just for the sake of getting residence permit and other documents. He described the act as callous and inhuman, noting that is a big blunder to marry just because of obtaining documents.

The German wife, Gabriella in her own comment told Oriental News that though she had never visited Africa before nor envisaged marrying a Nigerian, she was never a racist and had never bothered about colour of the skin.

She said she was fascinated by Timothy’s frankness and she had to follow him to Nigeria before they got married and went back to Germany.

She said she enjoys the communal life of the Igbo which was quite different in Germany where everyone seems to be on their own, saying that she was happy to be a product of the two cultures which even their children are happy with.

She disclosed that it was her husband that drew her closer to God, adding that the kind of trust and love they have built for each other has also rubbed off on the extended family.