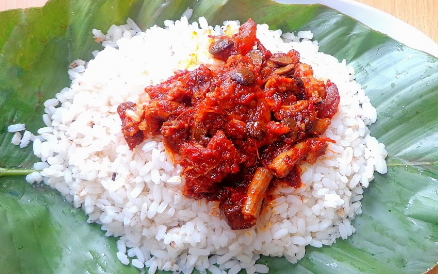 January 18, 2017 – Ofada Rice And You: Nutritional Benefits & Historical Facts You Need To Know

Do you know that Ofada rice is a name for the heritage variety of rice grown in south-west Nigeria? It is grown almost exclusively in Ogun State and named after the town Ofada in Ogun State.

Do you know that Ofada Rice is not indigenous to Africa? But was purported to have been smuggled by a soldier into Nigeria in 1940 when the soldier returned from Asia and planted the rice in Ofada Town.

Do you know why Ofada rice is typically priced higher compared to other available rice?

It has been regarded as a sign of status symbolism by some people and in contemporary times, it is sometimes served at classy parties because it has high nutrition values.

Do you know that Ofada rice is unpolished because most Africa rices are difficult to mill and polish and the rice bran that is left on the grain help strengthening the flavour and making it more nutritious?

Do you know that imported parboiled polished rice looks more aesthetically appeasing to the eyes than ofada rice but has less value of Nutrients to ofada rice?

In processing, ofada rice has only the husk removed while White rice has both bran and husk removed and parboiled then polished to look attractive. The bran is kept intact in Ofada rice which helps to give us a healthy dose of dietary fiber and in return the fiber helps in proper digestion and in the cleansing of the colon.

Do you know why ofada rice is preferable to imported parboiled polished rice when trying to lose weight?

The soluble fiber in ofada rice reduces/slow down the rate food leaves the stomach which gives a sense of fullness after a meal and help reduce/stop over eating which helps in losing weight especially when you eat it with vegetables (salad/Soup).

Do you know that due to the process of white parboiled rice, it loses most of the natural nutrients but are usually fortified with some unnatural vitamins but Ofada rice is loaded with natural nutrients like magnesium, manganese and zinc, potassium and some traces of vitamin E?

Do you know that Ofada rice is a perfect Baby Food as brown rice cereal/rice itself is good for baby’s first food due to high concentration of natural nutrition and fiber content it contains, this is a better option to refined white rice/corn cereal products has rapidly growing babies/ toddlers require rich nutrient diets to help maintain rapid growth cycles.