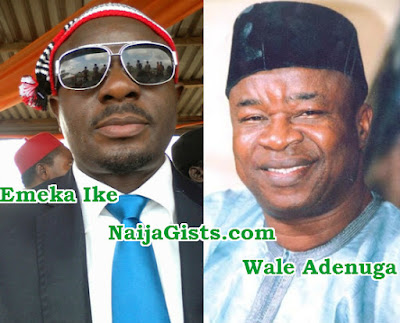 Mr Adenuga came after Emeka Ike for claiming he founded Nollywood in 1992.

In this exclusive chat with Vanguardngr, Emeka Ike faults assertions made by the veteran movie producer

“When they talk, they should know that the man they talk to, is a very intelligent man and not a riffraff or an idiot.”

“I am properly educated, an Engineer is not a man you take for granted; I am painstaking in my decision and I am very concise in what I say.”

“The Nollywood you know today is not the one that cropped up from Hilbert Ogungbe. Nollywood came about with the sales, marketing and multiplication of CDs. The Igbos got more involved by their investments. The Igbos did what they had to do, whether good or not, it has given us the platform.”

“They provided the medium for conveying our movies to every home. After a while, the Igbo people decided to go into movie-making themselves.”

“It is wrong to start saying who started Nollywood, who did this and who did that. It’s not a good way to go for a man of his pedigree. When he made his movie, nobody knew him, just like we made our movies when nobody knew us. The platform has been created by both the Yoruba and Igbo marketers in Idumota and he started making it more than even most of us that created the image that he took advantage of.”

“I’m personally working towards galvanising Kannywood, Nollywood and the Yoruba movies together. We cannot be divided, we should have a central working system. For you to now start dividing, it is backward for a man of that pedigree.

He should keep making good movies which we are proud of.”

“We should be responsible Nigerians not just make a way for our own juniors. If Wale Adenuga Junior will not suffer in life, what happens to other people’s Juniors?”

On why Nollywood is predominantly Igbo, Emeka Ike said;

“You could be right about that but that’s not to say that’s how Nollywood should be. When he (Wale Adenuga) made his movie, it was just a one-off. Several movies were made even before he made his own, that we didn’t know about. In that same 1993, Amaechi Obi and I made a movie that never saw the light of day just like his own didn’t.

But what we are talking about is history, pedigree. How did they start packaging this whole thing for export? How did investors get involved? How did all these become a budding industry? It is not impossible that Wale Adenuga would have made an unattractive movie. Let’s stop these tribal issues,”