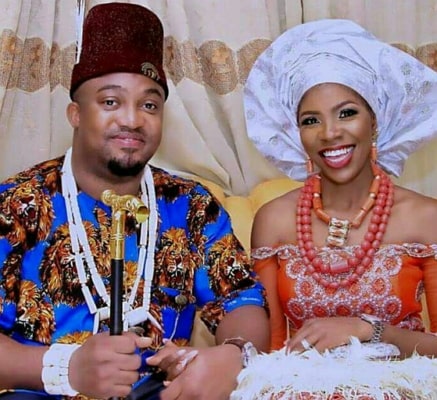 Traditional weddings are periods of excitement and a lot of activity especially because it involves the extended families of both sides unlike white weddings that could be just very close family relatives and friends.

Traditional weddings take a new twist if the bride is an Igbo lady. It is an activity taken very seriously. In the olden days, it used to be arranged by the parents of the future bride and groom, after careful investigations into each other’s backgrounds.

With the changes now however, both the bride and groom are free to choose whom they wish to marry and then bring them home for parental consent and blessings.

The Igbo traditional wedding is usually divided into four (4) main stages. It is not enough to propose to a woman- this would not guarantee the man taking her to the altar. The groom needs to make proper consultations with the girl’s immediate and extended family and follow the four steps every step of the way.

This is the very first and most important step. This is because if this stage is not successful, there would be no need for the other three stages. ‘Iku Aka’ literally means to ‘knock on the door’ while ‘Iju Ese’ means to ‘find out’ or ‘inquire’. Here, the groom is escorted by the members of hi family (father,one or two uncles) to the prospective wife’s family to officially declare his intention to marry their daughter and to ask for permission to do so.

When going for the Iku Aka, the groom is not expected to go with gifts but courtesy would demand going with few gifts as it would not be nice going to he in-laws house empty handed. Gifts to take include hot drinks, kola nuts(a must in Igbo land) a small gallon of palm wine etc.

At the visit, if the bride is home, she would be called to give her consent. If she gives a yes, the gifts would be accepted and shared there and then, if not, the meeting would be summarily dismissed.

However, if she does not live with her family, a date would be given to the groom’s family for an answer. If it is positive, he can then proceed to the next stage.

Before the next stage, an all-time important activity takes place. This is called the Iju Ese.  Here the bride’s family sends out one or two representatives to investigate the groom’s family background. It is a fact-finding exercise aimed at finding out cogent information such as family recurrences (such as diseases, illnesses, divorce history, negative characters such as temper, violence, mental stability, level of responsibility and commitment of their men to their wives and family) plus every other important detail. This is to ensure the groom is responsible and capable of taking care of their daughter.

Remember in the first stage, the groom only met with the bride’s immediate family. This time however,the visit would be to her extended family to inform them of his intent on marrying their daughter.

This is a very important stage because the approval of distinct family heads are needed. It is only after their approval that the marriage dates can even be debated on.

Since the meeting is now on a larger scale, the groom is also expected to go with more people than the first time. This time, his uncles and other males relatives from his parents’ side should accompany him. Also he must not go empty handed just as the first only this time, the quantity increases and he can even make additions such as snuff, soft drinks, yams goats etc.

After the consent of the bride’s extended family has been elicited, the groom now makes another visit with his family to settle the bride price. It is here that people especially non-Igbos dispute the wisdom of the bride price. This is because it can go as high as a hundred thousand Naira or as low as one hundred Naira. Be that as it may, it is worthy to note that this money is purely symbolic and does not in any way connote the true value or worth of the woman.

Prior to the visit, the groom’s family should ask the bride’s family for the customary engagement list of items to bring. The list involves items that are for certain people in the bride’s family. At this stage, it is pertinent to note that these items are negotiable and adjustments can be made.

Gifts for the “Umu Ada”

Umu Ada literally means daughters. The gifts here would be shared among all the frown daughters in the bride’s extended family. They include:

Gifts for the Umu Nna

Umu Nna means the frown men in the bride’s extended family. The gifts would be shared to them in order of seniority

Nmepe Uzo means to open the door. This is believed to foster acceptance

Meat, Loaves of Bread, tins of tomatoes, tins of milk

Cigarettes and Snuff/Heads of Tobacco 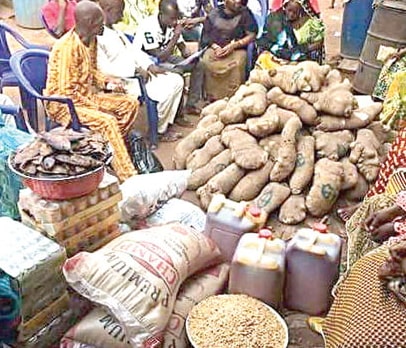 Cash Gifts (During the Bride Price)

These are symbolic cash gifts. The groom and his family may negotiate each one:

This is the fourth and final stage where the marriage takes place proper. Most couples print and distribute Igba nkwu invitation cards to invite guests. It is the formal traditional marriage and it takes place in the bride’s father’s family compound in her home town. It is the bride’s family that cooks all the meals for the groom’s family and guests. There could be live band performances and traditional dancers for entertainment. 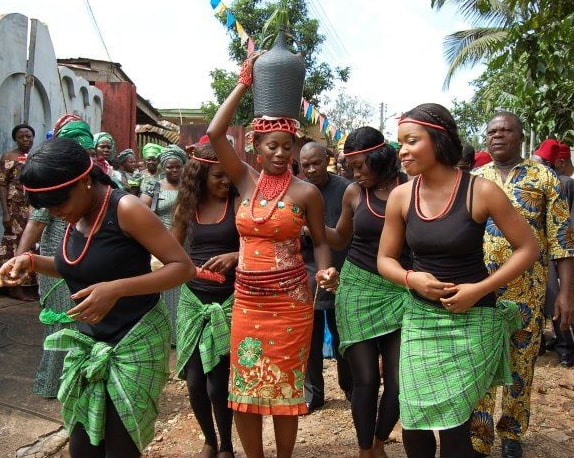 The general dressing is traditional with the bride and groom wearing a matching outfit. After the wedding, the bride usually goes hone with the groom on the same day.

WALKING DOWN THE AISLE THE IGBO STYLE

Preparing for a wedding is a daunting task more so when it is a traditional wedding. The Igbos have a defined method of performing their weddings which non-Igbos sometimes find tiresome. They are however imperatives which must be strictly adhered to.

After the initial stages another very important considerations is the outfit. In Igbo land the outfit matters a great deal especially for the bride. Even if the groom is non-Igbo, he would still be expected to wear a typical Igbo outfit at some point. The bride and groom’s outfit usually compliment the other since they are often from the same fabric.

It is obvious the bride is the cynosure of all eyes. This explains why great attention is paid to even the minutest detail of her attire.

Top on her list is the wedding blouse and Skirt: A large number of Igbo brides usually go for a combination of blouse and skirt more than a dress. They usually take into account their skin colour while choosing the colour of the fabric. They blouse are usually designed with embroidery, frill etc. The skirt on the other hand is also designed with embroidery, overlaps and beadings.

The head gear is also very important. Depending on the bride’s taste, she can use a head tie which usually matches the blouse or wrapper or go with strictly white to be on the safe side, or she can use a beaded cap or crown which are always coral in colour.

The last but by no means the least are the accessories. The bones in use often include coral beads, bracelets and a brooch. There are also traditional ones such as the “odu inyinya”. The shoes are high-heeled although there is usually a spare flats for the non formal part of the wedding.

As much as all attention is on the bride during a wedding, this does not mean the groom is left out on what to wear. Most grooms’ wear a hat. The most popular being the ” Okpu Agu” (Lion cap). Some also wear the red cap- a distinguishing cap for the Igbos.

For their torso, the groom could wear the “Isi agu” (Lion head) which is embroidered with lion heads, crowns and other regal symbols. The bottom half is usually obscure compared to other parts. The from can decide to wear simple trousers which would be wide-legged, or a wrapper which could be knee length or ankle length. The groom also makes us of accessories such as neck and wrist beads and of course, a walking stick.

The Igbo traditional ceremony is quite interesting to watch. After the guests have arrived and seated, it kicks off with the arrival of the groom and his family. The bride is expected to welcome them into her father’s compound after they must have dropped a token. 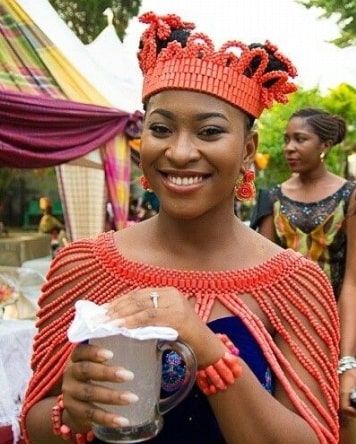 After they take seats, the bride goes in for a change of clothes and then comes out to greet her husband’s people. She also makes a general greeting to the other guests.

After this, the next outing is when she come to make her sales. This is a common  trend for Igbo brides. She sells any item of her choice. The items usually sold are eggs, groundnut, sweets, biscuits etc. She also gives her sisters and close friends to help her sell. This is an avenue for her to make money.

She sips the wine and gives the rest to him. After drinking, he puts some money inside the cup and goes with her to kneel in front of the bride’s father for his paternal blessings. After the prayer, the customary dancing begins. This signifies that the marriage has been concluded.

After the dancing, the bride’s parents pray for the newly married couple once again after which, the bride departs with her husband to start her married life.