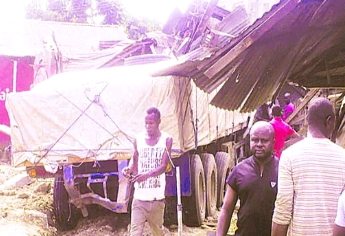 2 people were instantly crushed to death in the early hours of Saturday the 10th of Nove, 2012 when a speeding trailer lost control and ran into a  house at Port Harcourt-Airport Road, Igwuruta-Ali, near Port Harcourt, Rivers State, Nigeria.naijagists.com

The trailer belonging to a dominant indigenous cement manufacturer was fully loaded with cement and was heading to Port Harcourt when the unfortunate accident happened.

An eye-witness, who gave his name as elder Chikwe, told Sunday Sun at scene of the incident that the trailer was speeding when it suddenly lost control, brushed another trailer with registration number Bayelsa XE 653 BRC parked by the roadside.

According to Chikwe, conductor of the parked trailer whose name he gave as Sunday Aririuzo, was in front of the trailer topping oil in the engine when the vibration of the collision lifted Aririuzo and smashed him at the side of the road. He died on the spot.

Thereafter, the speeding trailer ran into a building at the side of the road, broke through the front store and ran into an apartment. The conductor of the trailer was said to have died while the driver survived with injury. Occupants of the apartment, Mrs.

Victoria Amaehule, and her nine-year-old daughter, Faith, who were lucky to be alive, told Sunday Sun how they miraculously escaped death. Victoria said she was awakened from a very bad dream.

According to her, she tried to ignore the dream, but a paralyzing cold suddenly gripped her. She became afraid and took her nine-year-old daughter from the room to another apartment.

Not quite 20 minutes they left the room when the accident occurred. She said two front tyres of the trailer rammed through the spot they had left.

It would be recalled that barely five months ago, a speeding tanker loaded with petrol fell at Igwuruta at a roundabout and burst into flames, a living camp was set ablaze and six persons, including a family of four sleeping in their rooms were roasted, while several buildings were burnt.(DailySun)