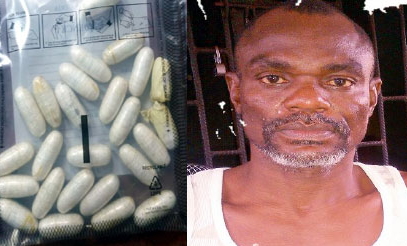 Odili Onyekwere, a 47-year-old man caught with drug at MMIA told the NDLEA that his inability to meet his family’s needs forced him into trafficking drugs.

He was arrested while trying to board a Kenyan Airways Flight heading to Madagascar.

After his arrest, he excreted 25 wraps of cocaine weighing 270g.

The Rivers State-born suspect blamed economic hardship on his action.

Onyekwere who is married with 2 children said frustration & inability to provide for wife and kids forced him to smuggle cocaine. He said his master promised to pay him $1000.