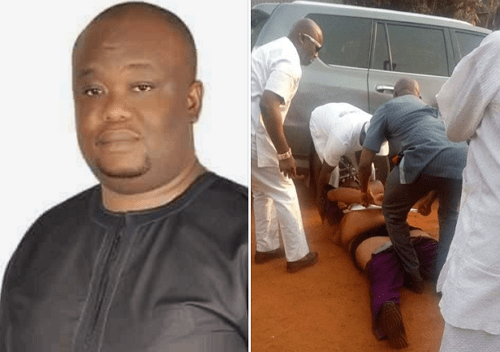 A politician in Imo stae, Hon. Ndubuisi Emenike has been confirmed dead by doctors after he was mistakenly shot at close range by one of his body guards..

Shortly after the incident, Emenike was rushed to a private hospitla in Owerri where he was confirmed dead.

Hon. Emenike Ndubuisi who lost the senatorial seat to Hon. Benjamin Uwajumogu who also died recently, is a renowned philanthropist.

The Commandant- General of Nigeria Security and Civil Defence Corps, Muhammadu Gana, has condemned the killing of the Action Alliance Imo senatorial district candidate by his body guard who happens to be a NSCDC operative.

Gana revealed that the suspect had been arrested and handed over to the police for investigation and prosecution.
The erring operative who was the security aide to Emenike reportedly shot the politician dead while firing in the air during a party to celebrate the electoral victory of an All Progressives Congress candidate during Saturday’s rerun election in Imo State.

While briefing the Corps management at the NSCDC national headquarters, Abuja, the CG described the killing of the politician as unfortunate.

He also condoled with the family of the deceased as well as the people of Imo State and Nigeria in general.