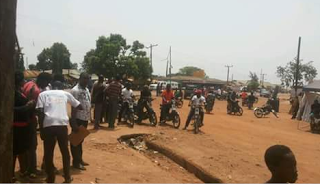 A 38-year old farmer, Sylvester Tyokyaa of RCM Primary School, Tyodugh village in Agan Ward, Makurdi, was on Thursday arraigned in a Makurdi Magistrates’ Court for alleged murder of a four-month-old baby boy.

Tyokyaa was charged with culpable homicide punishable under Section 222 of the Penal Code Laws of Benue, 2004.

The prosecutor, Insp. Michael Iorundu, told the court that the case was reported at the Nigerian Police Divisional Headquarters, ‘C’ Division, Makurdi, by one Isaac Kwaghga on Jan. 10.

Iorundu said Kwaghga told the police that on Jan. 9, the accused person went to the house of his younger brother, one Akwuave Tarpev at Tse-Yaji, Makurdi and hit his four-month-old baby boy’s head on the floor.

“Kwaghga said that while the infant was sleeping, the accused lifted him up and hit his head on the floor,’’ Iorundu said.

He said that the little boy was rushed to the Benue State University Teaching Hospital (BSUTH) for treatment, but later died.

According to the prosecutor, the accused person was arrested and he voluntarily confessed to have committed the crime.