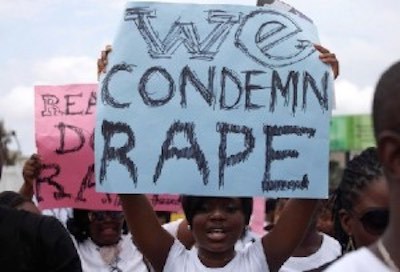 January 5, 2016 – Incessant Rape Cases In Lagos Nigeria On The Rise, Another Rapist Arrested In Epe

Peter Ortise, a 20-year-old man has been arrested by police in Lagos for allegedly raping a minor.

Ortise was nabbed at the Epe area of the state after the victim, a four-year-old girl, cried to her mother.

NAN gathered that the suspect, who lives in the same compound with the victim’s parents, had lured the minor to his apartment while her mother was breastfeeding her young baby.

The victim was said to have returned to her mother crying, which made the woman uneasy.

Upon examination, the mother discovered that she was bleeding through her private part and also had wounds.

The woman reportedly asked the victim what happened and she narrated how the suspect sexually assaulted her.

Confirming the incident, the command’s Deputy Public Relations Officer, Aliyu Giwa, said the suspect has been transferred to the State Criminal Investigations Department (SCID), and would be charged to court at the completion of investigation.