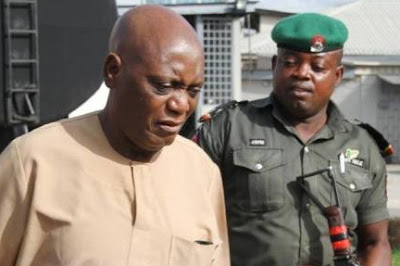 Former INEC officer Christian Nwosu today at a Federal High Court in Lagos denied that he was bribed by a former Petroleum Minister, Diezani Alison-Madueke, to rig the 2015 general elections for her party.

He, however, admitted that the N30 million he collected from her was for “logistics”.

Nwosu, who is a former Administrative Secretary of the Independent National Electoral Commission in Kwara State, spoke while testifying in a trial-within-trial before Justice Mohammed Idris.

Nwosu was charged by the Economic and Financial Crimes Commission (EFCC) alongside another official, Tijani Bashir, for allegedly receiving N30 million bribe from Alison-Madueke.

They were arraigned along with Yisa Adedoyin, who had pleaded guilty to receiving a cash payment of N70 million from Alison-Madueke.

Alison-Madueke, who is also named in the charge, is said to be “at large”.

Speaking under cross-examination by the EFCC prosecutor, Mr Rotimi Oyedepo, Nwosu claimed he did not personally benefit from the money.

He said it was given to INEC ad hoc staff for logistics.

“I did not personally benefit from the N30 million; the ad hoc staff benefited because the elections went smoothly with the logistics support.

“The money was not given to me by way of cheque; we were asked to go to the bank to collect it.

“No cheque was given to me at the bank. I just signed a document at the bank which confirmed the receipt of the money.

“I did not instruct the bank to transfer the money to any account because it was not for me but for the coordinator who is to ensure that the money gets to the ad hoc staff.”

Nwosu said N13 million and N17 million was paid into his accounts on April 7 and April 13, 2015 respectively.

He claimed that the statements he made at the EFCC were “dictated” to him, while the one he made voluntarily was neglected.

Justice Idris has adjourned continuation of trial until Nov.15.