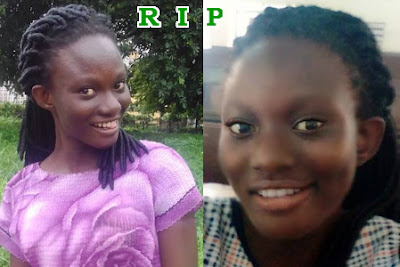 The parents of Mercy Afolaranmi, the student of the Obafemi Awolowo University, Ile Ife, who died in a controversial circumstance last Thursday, have called on the Osun State Police Command to investigate the death of their daughter.

The parents, who spoke with PUNCH Metro on Thursday, rejected reports that Mercy committed suicide, saying she had told them that she would return home on the day she was alleged to have taken poison.

It had been reported that 16-year-old Mercy killed herself after allegedly getting a poor grade in a compulsory 100-level first semester course.

There had been speculations that the Ekiti State indigene took rat killer mixed with a black substance after getting an E in CHM 101 and was rushed to a private hospital where she died.

Our correspondent had reported a Facebook post by her brother, Timothy, who raised doubts over the claim, saying she was a devout Christian who would not contemplate suicide.

Findings by PUNCH Metro revealed that Mercy was a worker at the OAU Deeper Life Campus Fellowship, the campus arm of the Deeper Christian Life Ministry, where her parents were leaders.

Her mother, Mrs. Elizabeth Afolaranmi, said Mercy called her on Tuesday to announce that she would be coming home for a seminar in Ado Ekiti.

She said, “On Tuesday, she called me and said she was coming home to deliver a paper at a seminar for some teachers. She said the group would foot the bills for her transport and feeding.

“Around 6pm, I called back and it was the same girl that picked. She said Mercy was still asleep and her door was locked. I told her to go and knock the door and tell her that her mother wanted to speak to her. She said my daughter replied that she would speak with me later.

“Around 7.30pm, I called again and she said it appeared like my daughter had taken rat poison because she was vomiting. I asked how she knew since she was not with her. She said the smell of the poison had got to where she was. I was alarmed and asked her to get people to force open the door. She said she had done that and the door had been opened.”

The victim’s mother said the friend demanded N20,000 which was requested for Mercy’s admission to a private hospital where she was rushed to, adding that the phone later went off.

Elizabeth said when she got to the hospital on Thursday, some Mercy’s friends observed that her pulse was weak.

She said her daughter was taken to the Obafemi Awolowo University Teaching Hospital where she was rejected, as the doctors said it was too late.

“I was weeping and praying for her return to life. I clutched to her. The hospital workers said I should go to the mortuary to continue my prayers and I did. Later, some church members asked me to let go of the body after they also offered some prayers.

“My daughter was a child of God. She became born again at a tender age. How can she kill herself? She died atop the note she made for the lecture she was to deliver in Ado Ekiti. People thought it was a suicide note and they gave it to the police as evidence of her suicide. But when we got to the station and the Divisional Police Officer opened it, we all saw that it was the note she made for the lecture. They did not allow my daughter to fulfil her mission in life. They cut short her life.

“She didn’t kill herself; she was murdered. She made soap on Monday, which is still in her room. She was going to sell the soap. If she wanted to die, she could have used the soap chemicals,” she added.

Mercy’s father, Matthew Afolaranmi, said his daughter was taught as a Christian to know that suicide would take her to hell fire.

He said, “She knew that anybody that kills himself or herself is going to hell fire. When I got to her school, the testimonies I heard from brethren confirmed what I have always known. Even though she was staying outside campus, she never allowed anything to distract her from the things of God. Before the incident, she met the president of her fellowship for counselling on her spiritual life. So, how could such a thing happen and the next thing is for her to kill herself? All the circumstances around this case show there was no way she would kill herself. A girl that was coming home and then she suddenly killed herself. How?”

We learnt that although the autopsy report had been released, the deceased’s family had yet to access it.