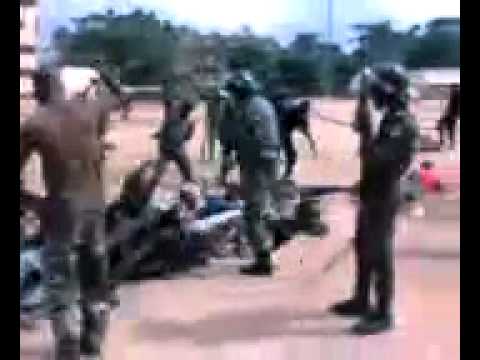 Before meeting his untimely death in the hands of the soldiers, 48-year old Onaiwu was said to be an operator of a campus shuttle bus between the University of Benin and Ring Road and while driving his bus on Tuesday, it collided with a car belonging to an Army lieutenant.

While explaining what transpired to journalists at the University of Benin Teaching Hospital (UBTH), Matthew Onaiwu, elder brother of the deceased, said soldiers were mobilised to batter his brother at about 7pm on Tuesday after the accident.

He after the soldiers beat up his brother, they allegedly dragged him to the S & T where he was allegedly further beaten to a state of coma again.

When attempts to revive him failed, he was taken to UBTH by the soldiers and some policemen who tried to intervene.

According to Mr. Matthew Onaiwu, his younger brother finally died on Thursday afternoon at the hospital as a result of the severe beating.

He disclosed that the family had earlier reported the incident at the Ugbowo Police Station, Benin.

When contacted on phone, the Administrative Officer of S & T simply identified as Capt. Uche was angry and refused to comment on the issue.

“Why are you calling me? Who gave you my number? There is no such story here. Go back to UBTH,” Capt. Uche shouted back at the caller.