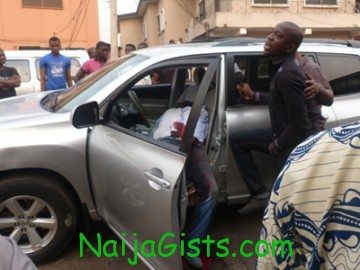 Scene of the killing

According to a report in Punch, a young man by the name of  Niyi Ehindero, was on Thursday allegedly shot dead by soldiers attached to Operation MESA Unit on Bada Street in Mushin area of Lagos. naijagists.com

Based on eyewitness reports, the soldiers shot Ehindero at close range in his car, when they went to the area to disperse hoodlums who were engaged in a fierce battle.

A friend of the deceased, who craved anonymity, said, “Ehindero and I just came to Bada Street to see a friend when we heard some gunshots. I ran into a nearby house but Ehindero was not fast enough. Eight soldiers ordered him to come out of his car but he argued with them. Suddenly, one of them shot him in the crotch and he died immediately.”

Hundreds of people gathered to see KUSH’S corpse, which was lying in a grey Toyota Highlander Sports Utility Van with number plate Lagos FF605 KRD.
Our correspondent learnt that another man identified simply as Wasiu was also shot in the leg by the soldiers.
The prolonged violence in the area recurred on Thursday as two factions of area boys engaged in a supremacy battle using guns and all manners of weapons.

It was learnt that many people sustained injuries while properties were vandalised in the violence which lasted for several hours.
The Fadeyi end of Ikorodu Road was littered with broken bottles and expended shells as well as bloodstains. Shops were locked and residents remained in their homes as the hoodlums took over the entire area.
The soldier, who headed the operation, and identified himself simply as Matthew, a Second Lieutenant, however told our correspondent that the victim was killed by the hoodlums.
He said, “We were on patrol when we realised that hoodlums had killed and injured many people. We have however arrested two of the hoodlums.
“The fight is a supremacy battle fuelled by thugs who wanted to control businesses in the area. I cannot say who started the fight but I know that because Lawani and Kadiri streets are economically buoyant, thugs from other areas always come to fight them.
“The sad thing is that innocent people either t sustained injuries or get killed when they start their fight.”
At 6pm, policemen attached to the Alakara Police Station were seen conveying the corpse to a patrol vehicle.
A resident who craved anonymity said, “He was killed by the soldiers. If the military authority is willing to investigate, all the residents are ready to testify. An autopsy will reveal that the bullet that killed him emanated from the guns of military men.”
It was learnt that Ehindero was in his 30s and was a contractor. He had two big trucks, which he used to supply sugar and rice to traders in Mushin.
He was married but had no child yet. He lived at 5, Oguntade Street, Maryland and had just returned from the United Kingdom on a business trip shortly before Christmas.
Ehindero, who was killed by OP MESA 33, was said to be a popular businessman in Mushin area where most of his customers are.

Hundreds of people gathered at the scene of his murder and rained curses on his killer and asked the Lagos State Government to invesigate his murder and brought the killers to book.
A man, who identified himself simply as Olawale, said, “How could they murder such a young and unarmed man like that in a broad day light?Even if they asked him to alight from his vehicle and he refused, is that enough to kill him?

“If they are interested in restoring peace in the area, they should have gone after the hoodlums who have been causing mayhem in the area for a long time. It is unfortunate that such a promising man should be unjustly killed in his prime like that. It is high time government restored law and order in the area.”

When contacted, the spokesperson for the state police command, Mr. Samuel Jinadu, denied any violence in Mushin.

“Don’t go and write what did not happen. There is no violence anywhere,” he said.