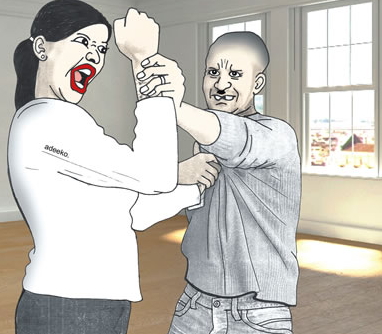 August 11, 2017 – “I Invited The Devil Into My House When I Married My Second Wife” – Divorce Seeking Polygamist Tells Court

Concerned by his wife’s stubborness, a civil engineer, Kazeem Azeez, today pleaded with a Mapo Customary Court in Ibadan to dissolve his 10-year-old marriage to his wife, Fatimoh.

“My Lord, little did I know that I was inviting the devil into my house when I married Fatimoh 10 years ago.

“As soon as she got into my house as a wife, Fatimoh, started showing the stuff she is made of by tormenting and fighting me and my first wife.

“In fact, nobody in this court can stop her anytime she is ready to fight. As I speak My Lord, Fatimoh has already driven out my first wife with her children,” Azeez, who lives at Ayegun-Olomi area of Ibadan, told the court.

Apart from fighting him all the time, Azeez said Fatimoh, had also caused disharmony in the family.

“I have sworn not to have anything to do with her again because she is threatening my life and she is highly disobedient and unwilling to take instructions from me.”

Fatimoh, however, objected to the dissolution of the marriage and denied the allegations made against her.

“My husband, Kazeem, says he does not want me to be pregnant again; he enjoys having sex with me but does not want to hear that I am pregnant.

“Anytime I told him that I missed my period, Kazeem will quarrel with me and that is the major problem between us.

““I don’t fight or beat his first wife except that she usually looks for my trouble.

“However, my lord, please give me a chance to correct my bad attitudes and I promise that within the next few weeks or months, my husband will have cause to tell you good news about me.”

While admonishing Fatimoh, the President of the court, Mr Ademola Odunade asked her to do everything within humanly possible to bring the first wife back to the family.

“I can assure you that as soon as you make amends, your husband, Kazeem, will be happy and he will settle this matter amicably.”

Odunade adjourned the case until Sept. 26 for continuation of trial.